I should have known better. I mistakenly thought since they sell Japanese knives at the store that they would know how to sharpen them, looking back now that was a foolish assumption.

They made all of my Japanese knives double bevel. They are single bevel knives. After browsing r/sharpening this morning it seems like they probably put them through a knife sharpening machine (NOT a professional sharpener like they claimed in the store!) that has now forever warped the metal. They ruined about $400 worth of knives.

I'm mostly here to vent and warn anyone else to please never take ANY knives to Williams Sonoma. In my google search to see if they were decent, I didn't read any horror stories about ruined knives.

So here's my PSA: NEVER TAKE YOUR KNIVES TO WILLIAMS SONOMA FOR SHARPENING.

The sad state of my knives: chef's knife, paring knife.

EDIT: Thank you so much for all the education and comments. There are so many knowledgeable people on here. Long story short, it seems the knives aren't ruined, just a little mutilated. I am going to try and find a professional to fix them and learn how to use a whetstone so I don't have to risk the knives anymore :). 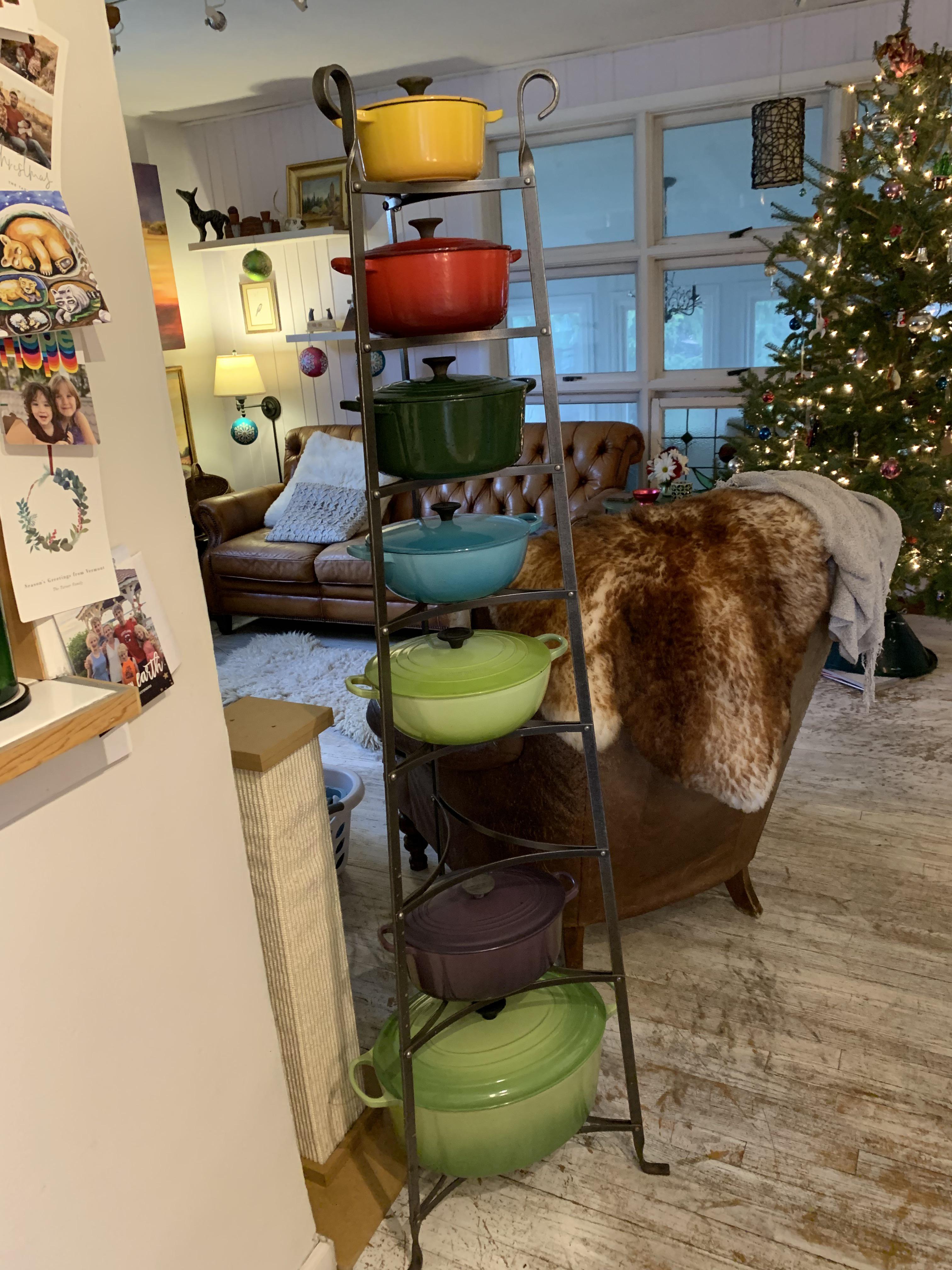 I tried the Holiday Blend, Pumpkin Spice, and Peppermint Bark. I thought the first two were mediocre but the Peppermint was so yummy I went back and bought a bunch more. The Pumpkin is the cheapest, presumably because it’s a fall release and the others are winter.

The capsules are aluminum and you can take them back to Williams Sonoma for recycling.

I also saw some compostable pods in the clearance bin but didn’t buy those.

Hope that’s helpful! Would love to hear if anyone snagged any and what they thought.

I'm having a hard time finding many reviews/videos on this pan. I like it because of the enameled interior, but the few reviews I have read mention sticking and it scares me. Does anyone who owns this skillet have any thoughts? Thanks in advance! 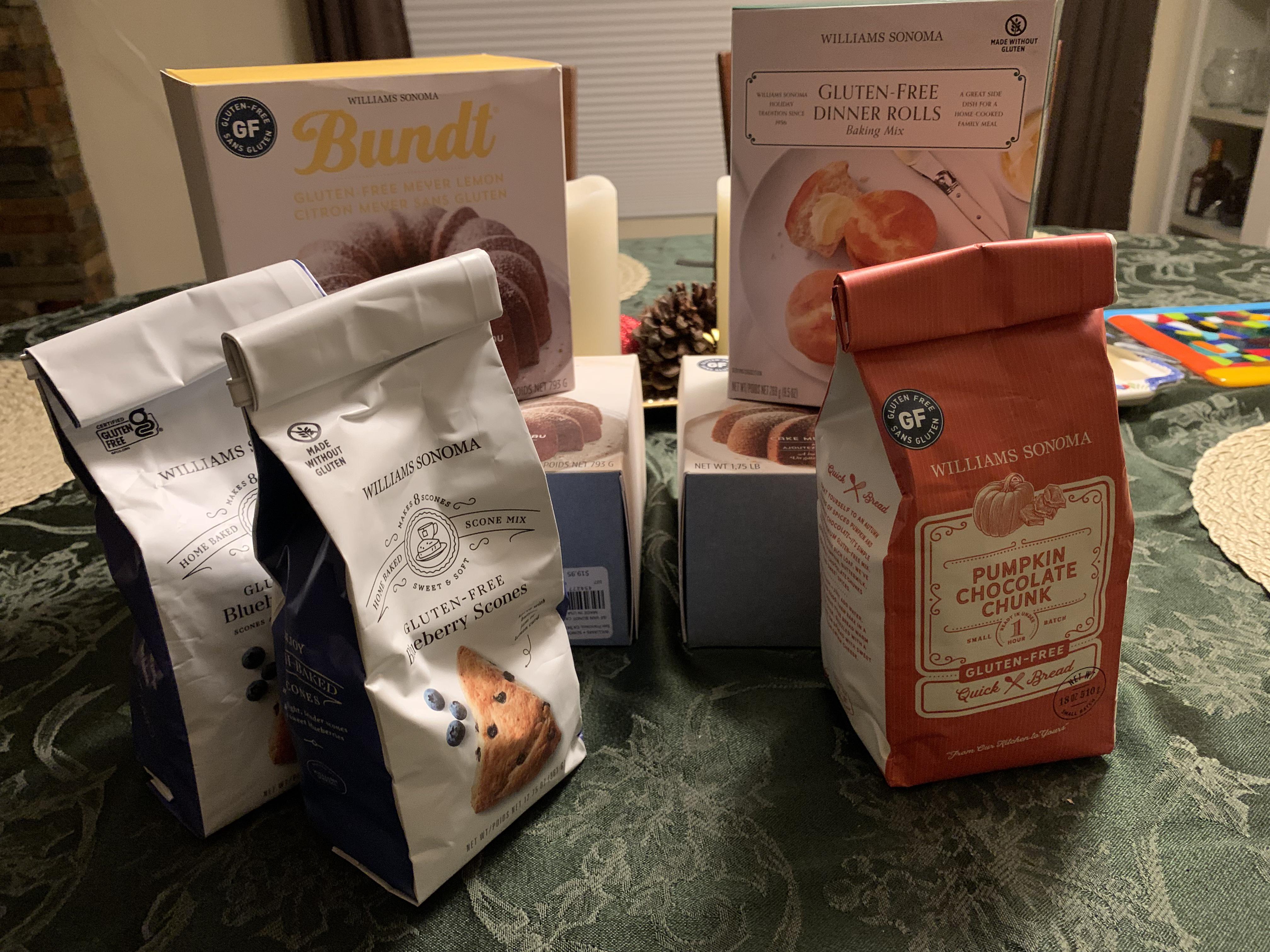 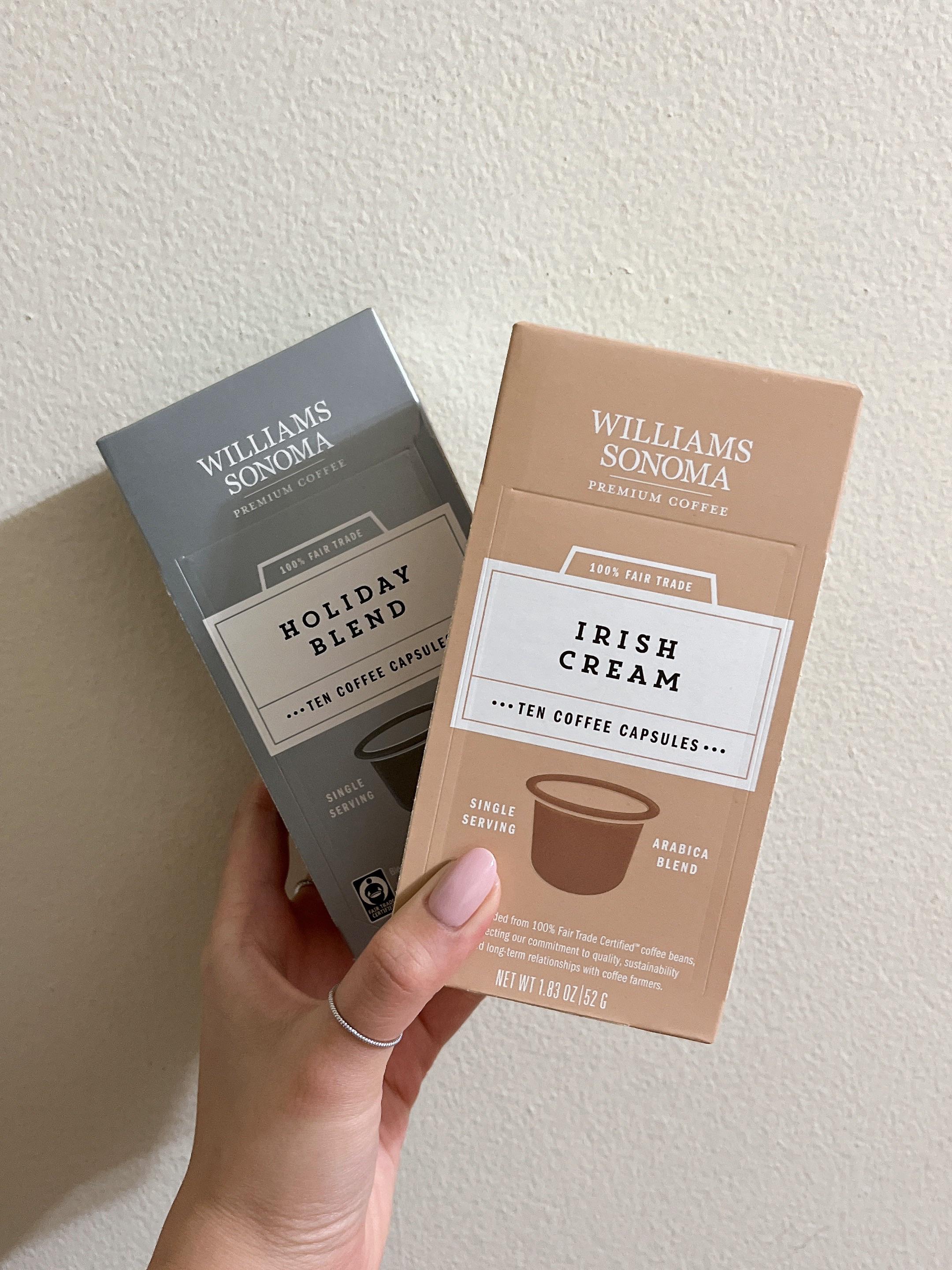 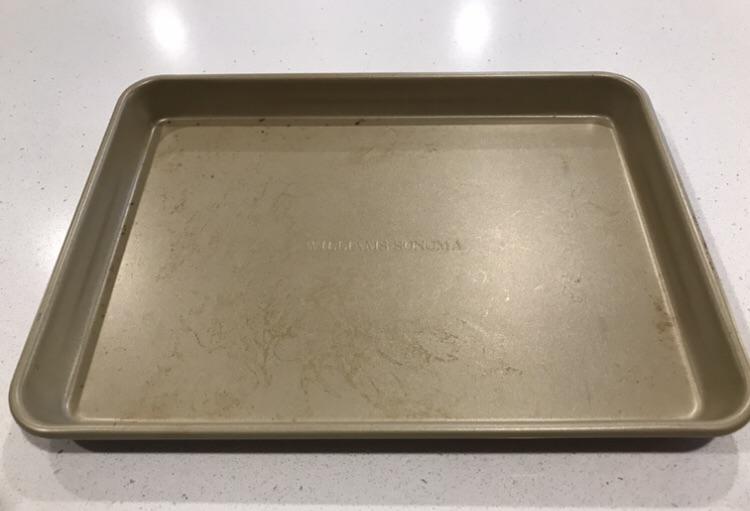 I’m looking at getting this 12” pan: https://www.williams-sonoma.com/m/products/lodge-triple-seasoned-fry-pan/?pkey=s~black%20lock%20cast%20iron~27&sbkey=default

Have any of you fine people ever seen this series of pans offered for less?

My mom is aggregating recipes for my siblings and I to have when we move out. Growing up for the holidays she would make the William Sonoma 2002 Salad Cookbook (isbn 13, 978-0743224406) Winter White Salad. I’m not having luck with Google or web archive but I know a few ingredients:

It didn’t have cauliflower or pomegranate seeds, but I’ve found similar recipes online that use those. 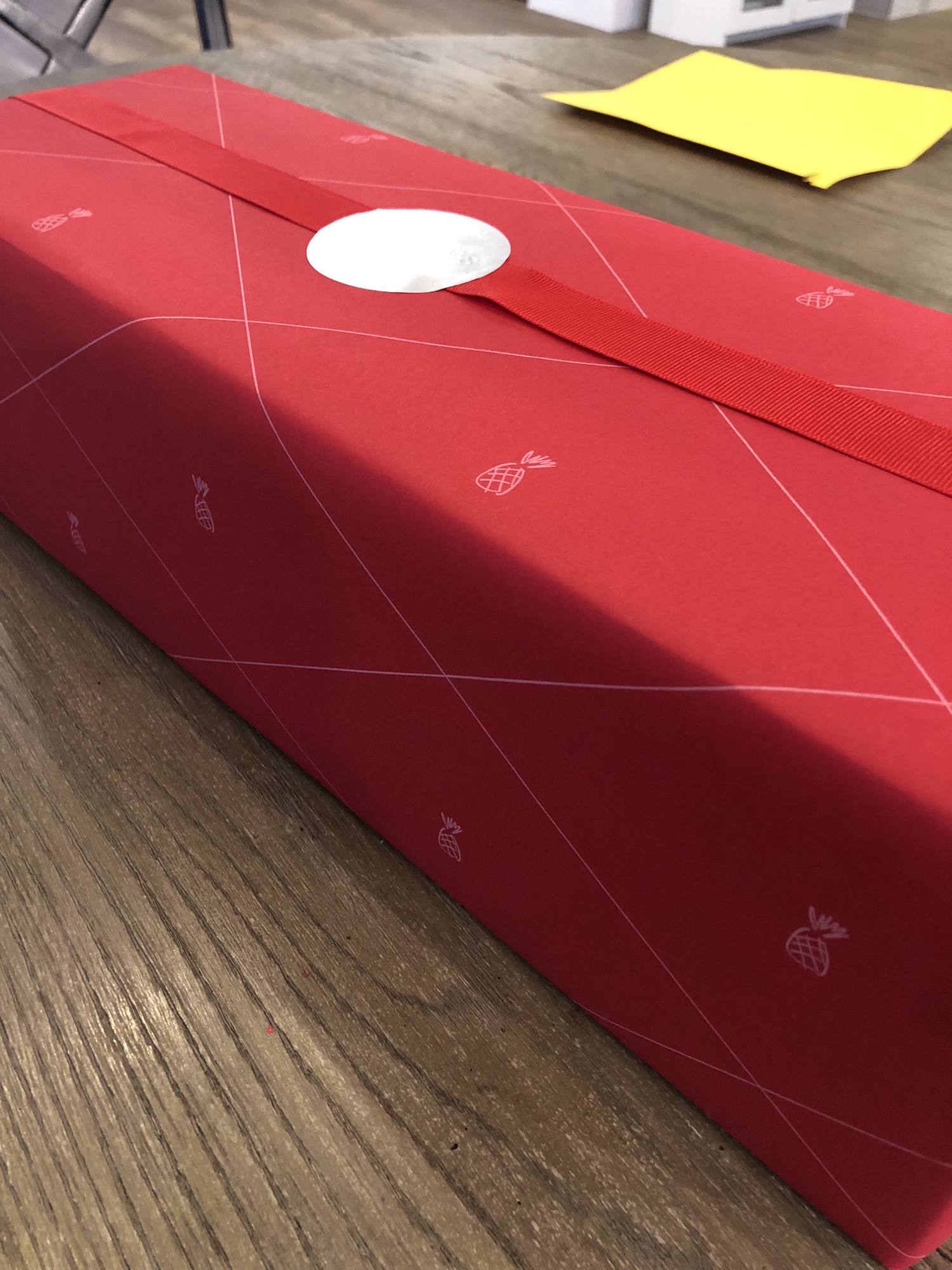 I do not know if this post breaks any rules, if it does please take it down.

I am a serious beginner home chef that will be moving into my own place next month. I have been in the process of researching and buying kitchen appliances and utensils. An example of how serious I am in acquiring good equipment: I just bought a Breville Bambino Plus and Le Crueset enameled cast iron pan. I like good things but I also like good prices and they were purchased at significant discounts.

I typically take my time to ask questions and make posts but Williams and Sonoma is having a big one day only sale and I feel like I'm pressured into making a decision before midnight!

I was planning to purchase separates (had a budget of 300-400 for everything) after reading the starting guide and posts (ex. Wusthof Ikon chef knife) but there are some really good deals on W&S https://www.williams-sonoma.com/shop/sale-special-offer/premier-event/offers-cutlery-premier/?cm_type=lnav&isx=0.0.1840

A quick cursory glance at some sets and comparison to Amazon prices show good deals.I would like to hear thoughts of those that are experienced. I currently have no cutlery of my own except for newly purchased Messermeister steak knives.

I'm even looking at bread knives... too much to consider. Any help would be greatly appreciated! Thanksss

EDIT: I'm looking for a set (not necessarily purchased in a set) for a starter serious beginner cook: Basic starter from what I have researched so far: Chef knife, pairing, bread knife (I also looking at Chinese cleavers and knives to open melons)

Style? - I prefer Wusthoff or Japanese

&nbsp; Steel? - stainless / carbon / carbon clad in stainless - preferably stainless or something with less maintenance and harder steel to withstand usage (I do take care of my stuff though

&nbsp; Handle? - western / hybrid / Japanese (d-shaped, round, or octagonal) - I've only used Western (my brother's Wusthoff classics) however, I require an Ambidextrous handle (I just 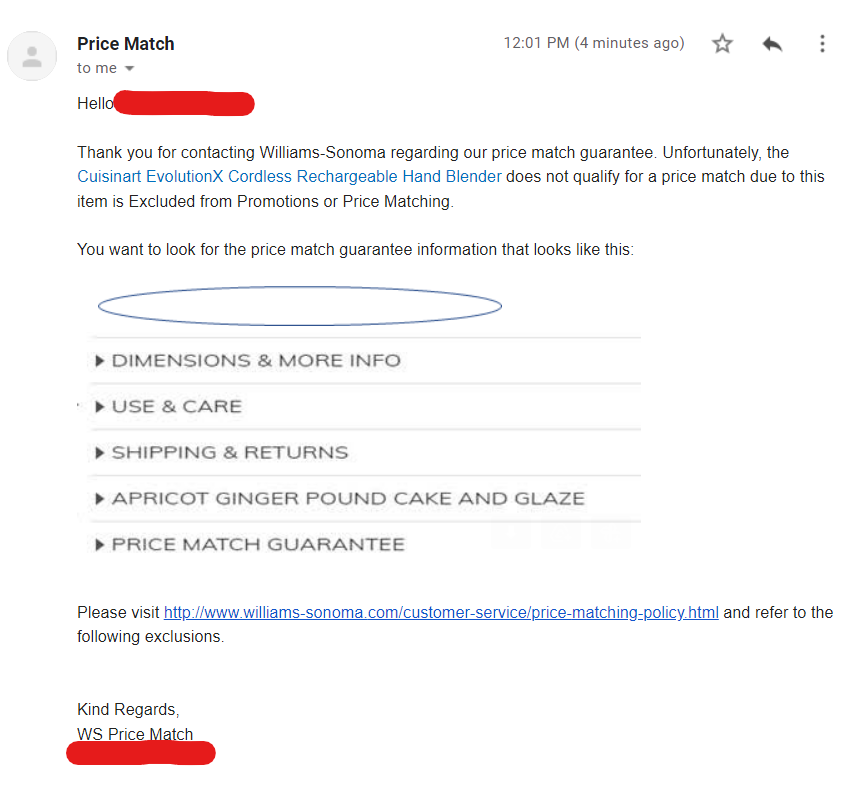 👍︎ 7
📰︎ r/mildlyinfuriating
💬︎
👤︎ u/IfIWasCoolEnough
🚨︎ report
Hi all! I am new to LC and want to buy an oven and could use some guidance. I found a couple at Williams Sonoma that I am interested in. Are they good deals? Should I wait for a Dutch oven? I am a bit confused by the different styles. Thanks!! reddit.com/gallery/r787je
👍︎ 5
📰︎ r/LeCreuset
💬︎
👤︎ u/Ashleys8888x
🚨︎ report
I AM Shelley Nandkeolyar and I sold the very first pair of Levi jeans online in 1998. Since then I’ve been CEO of hundred-million dollar companies and have brought some of the biggest brands in the world online -- Williams-Sonoma, Pottery Barn, The Home Depot, & Martha Stewart, to name a few. AMA!

Hi Reddit! My story's kind of a long one but I'll try and be brief as possible.

As the title suggests, I've been doing eCommerce since eCommerce was really a thing. I launched Levi & Strauss' online store in the late 90s and had the honor of selling the very first pair of Levi jeans online on March 31st, 1998 at exactly 2:31 AM EST to a customer on the West Coast -- by the way, if you’re out there jeans-buying guy, I’d like to buy you a beer some day. I later went on to serve as VP of eCommerce for Williams-Sonoma and led the team that launched williams-sonoma.com, potterybarn.com, and potterybarnkids.com, the foremost of which became an important case study for the Harvard Business Review. I also oversaw, as President, Martha Stewart and Home Depot's eCommerce divisions from their youngest days, taking the latter from a few million dollars in sales to billions in four short years.

I've served as CEO for Norm Thompson Outfitters, Gumps, and the Blair Corporation and currently sit on the Board for shop.org and LuLus. I've also advised and worked with numerous companies ranging from Porsche and Audi to Hallmark to Proctor and Gamble and many, many more, either expanding or pushing their brands into the digital world.

My newest venture is The Ivory Company at http://theivorycompany.com, where I currently preside as CEO. We're a branded, home décor business that focuses on high-end products in shades of ivory, cream, and white. If you're into that sort of thing, please check us out! We also have a Facebookand new Pinterest page.

Really, I consider myself to be very lucky and I think I've been able to gain a lot of insight and experience throughout my career, which I'd be more than happy to share. I’ll be here for awhile, so feel free to ask me anything, from start-ups to building your own career path to business in general to fighting duck-sized horses (or vice versa)...you guys still do that, right?

EDIT: I've been at this for about 6 hours now so I'm going to take a break. Feel free to keep asking questions, though, and I'll do my best to answer them. In the meantime, check out the site and please follow us on our social media channels; it really helps a lot:

👍︎ 334
📰︎ r/IAmA
💬︎
👤︎ u/snandkeolyar
🚨︎ report
Does Facebook Marketplace count?! Found this 126 bottle Williams Sonoma wine rack for $40. It retails for $330! Best find so far! Just brought it home and cleaned it up, I’m so stoked to fill this up. 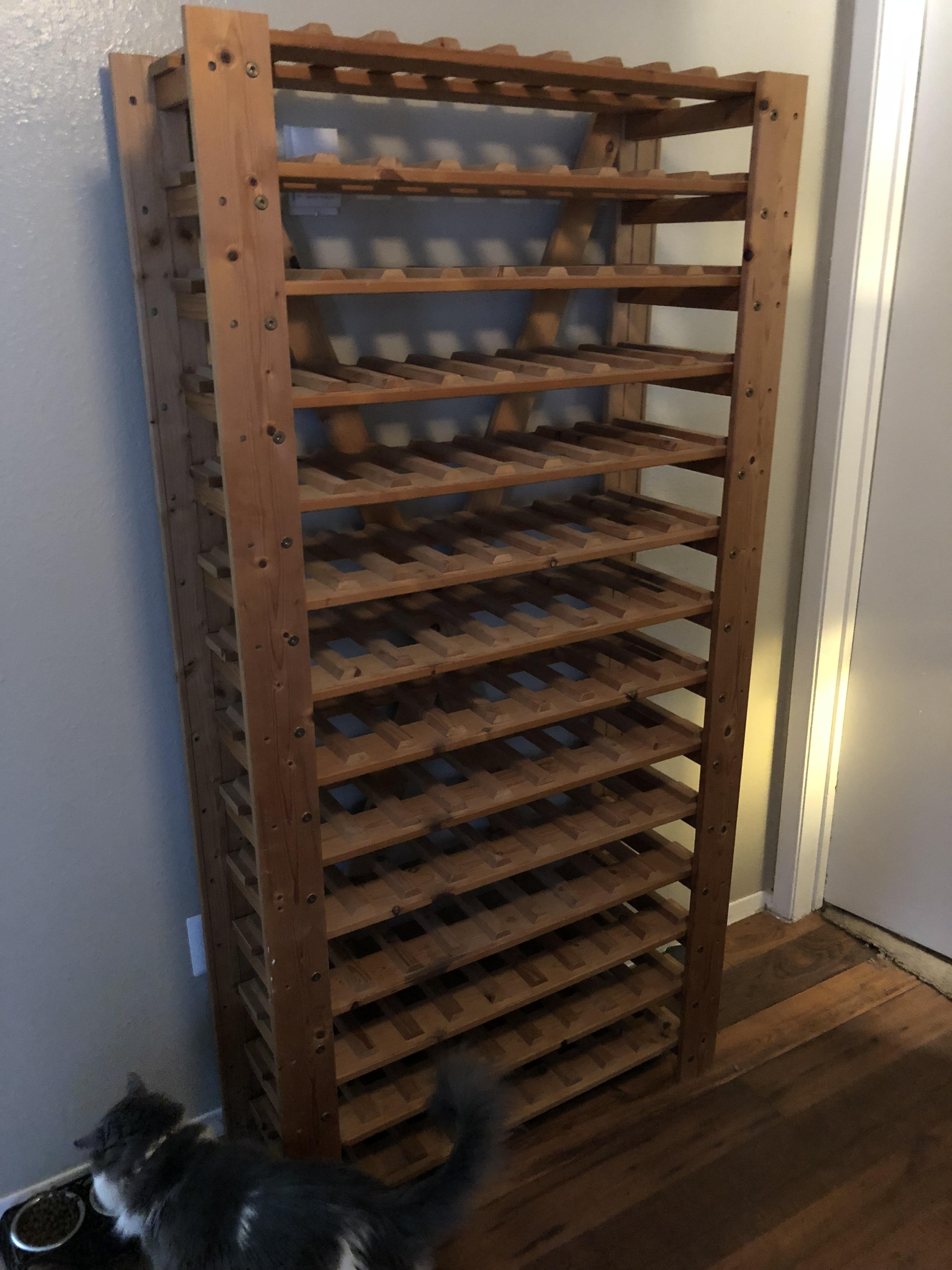 My sig other realized our gift card expires tomorrow and she wants to use it on a chef’s knife since ours is pretty poor quality and with COVID we’ve been doing way more cooking at home. Since it’s Williams Sonoma and she likes how the Japanese knives look we’re pretty much narrowed down to Shun (I know could be worse).

Looks like can get the Premier, Classic, Hikari, Kanso, and Premier Blonde and fall in that $200 range. All 8”

Besides just picking the most expensive out of those 5, any suggestions?

Hi everyone! This year, my family member hosting Thanksgiving is interested in trying Williams Sonoma gluten-free thanksgiving dinner for everyone to simplify the cooking aspect. I’m the only one with celiac so I’m being asked whether or not I’m comfortable with this option. I’m going to call Williams Sonoma tomorrow to learn more & ask the standard questions, but was wondering if anyone has had any experience ordering this? It was be a very bad time for everyone involved if I got sick from this😅 Here’s the link for anyone interested in looking it up. Williams sonoma gluten-free dinner

Long story short; partner is thinking about a change of professional scenery soon(ish) from the Williams Sonoma umbrella, and we've built up our kitchen using her very nice 50% employee discount. This discount sometimes works on sale items as well, and its how we've gotten some All-Clad pans, Le Creuset pots, Vitamix blender, OXO wares and other gifting items.

I've posted in the "recommend me" thread before, and have searched through the other "What to get at WS" posts, but to recap, I have 4 years professional experience (prep/line cook), and sold off most of my other knives after changing careers to IT. Now, I am using a handy, second-hand Victorinox and some KitchenAid set that we were gifted.

I know how this sub feels about mass market stores and their brands like Williams Sonoma, but I am making do with what I have to save me some money on better than decent knives.

That being said, what should I get?

I'm a bit torn on getting some very beautiful looking Shun knives, but the Wusthof Kanren line is appealing, though no lifetime warranty. The Kramer looks GREAT, but is the appeal only in the looks? I also saw some recommendations to get the Shun Fuji line at the discounted price.

I have held 90% of these knives, done a ton of research and am ready to buy, just looking for more opinions on those that have more experience.

The girlfriend is okay with getting a set for matching (I know I know) or getting individual pieces that will live in a Magnetic Knife Block (has to be magnetic, she is clumsy).

I'm not super into the dutch ovens but I ordered some Hedwig pie birds and the Voldemort casserole.