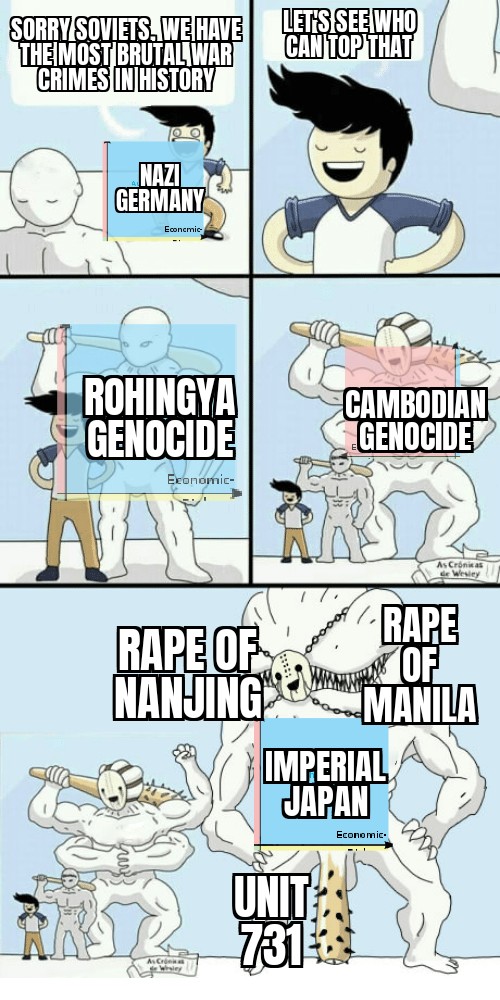 👍︎ 1k
📰︎ r/PoliticalCompassMemes
💬︎
👤︎ u/CurryLord2001
🚨︎ report
Events such as the Nanking massacre, Unit 731 and the Manila massacre should be taught the same way the Holocaust is.

Everyone knows about the Holocaust and the atomic bombings. I find it shocking how few people other than Chinese, Koreans, Filipinos and other Asians know Japanese war crimes. Even as someone who loves Japan and considers it to be my second home, I find it revolting and infuriating how many people consider Japan to be a victim of the war rather than one of the main aggressors. The fact is, the Japanese military killed more people than the Nazis did. Countless people I see on social media have this summary of the Pacific War: “The Japanese bombed Pearl Harbor and only killed navy sailors, and then the evil Americans dropped nukes on 2 of their cities in revenge.” I even saw a comment on Facebook that got over 4000 likes that said “America genocided Japanese in 1945 for no reason.” How so many people can be that ignorant is frankly alarming to me. As an American I agree that the atomic bombings were indeed a horrific war crime, however the amount of vilification the US gets for them while a lot of people don’t know or don’t care about Japanese atrocities is very frustrating to me. Japan had a nuclear weapons program of their own, and would’ve used them against US cities without hesitation had they built them first. Both sides committed horrific crimes, and we should all be thankful that another conflict like WW2 is unlikely to happen again.

Edit: Revisionists can point to US oil embargos on Japan for justification of the attack on Pearl Harbor all they want. Without the savagery of what the Japanese army was doing in China, the embargo would never have happened.

👍︎ 65
📰︎ r/TrueOffMyChest
💬︎
👤︎ u/Snoo_54214
🚨︎ report
After reading about the rape of nanking I read about unit 731. Wtf! Also fuck USA for granting immunity in exchange for the data 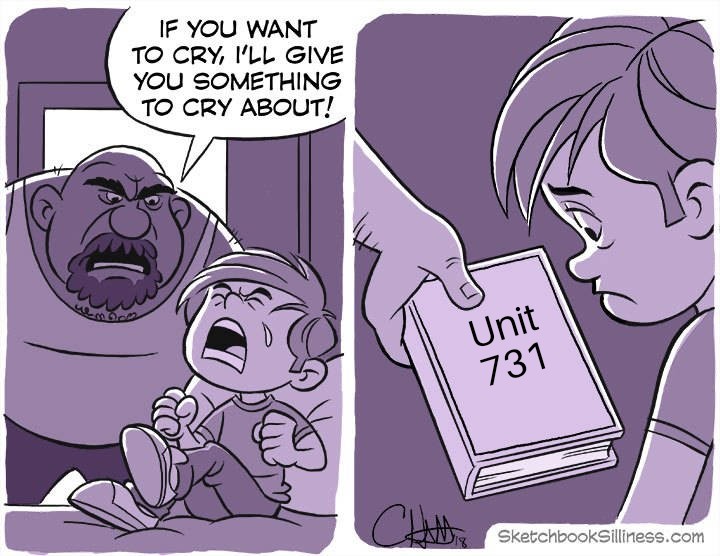 Just as the Nazi scientists who developed rockets for Hitler were not prosecuted. Immediately following World War II, the world was in chaos. Old alliances, spheres of influence and kingdoms had ceased to exist and the vacuums created were rapidly being filled in. Asia and Europe were up for grabs.

The military leaders knew then as they know now that peace is the name given to that short timespan between wars. Wars are like sunrises. There’s another one coming.

Bearing this in mind and knowing the state of the world back then, they opted to use the knowledge gleaned by their enemies and put it to a useful purpose to hopefully save lives in the future.

Nothing can bring back the lives of those already dead, but by learning from those deaths, others may be prevented. This was the reason the monsters of Unit 731 were spared punishment. The extensive research done on live, human subjects can never be repeated, so the wise thing was to take advantage of what had been done and apply that knowledge to develop and deploy defensive tools and tactics to prevent as much harm as possible in the future.

It should also be noted that the Russians DID prosecute the defendants they had in their custody. Most of those responsible were held to account.

Here’s a link to a Japan Times article about the camp and what took place there. 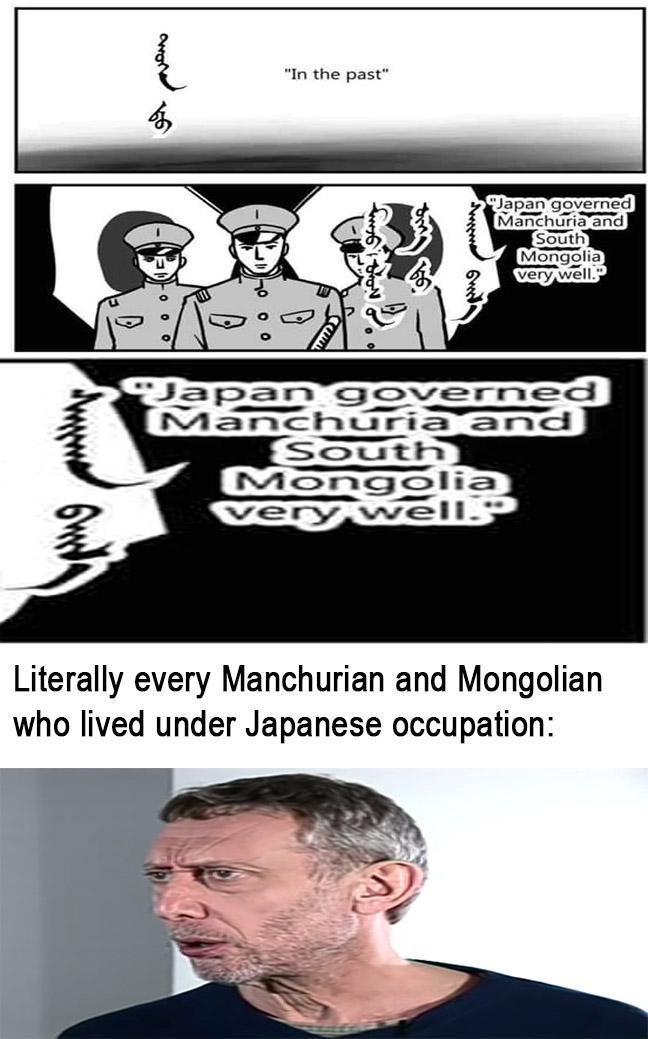 👍︎ 397
📰︎ r/HistoryMemes
💬︎
👤︎ u/MrStoccato
🚨︎ report
Pardoning Devils: The American Cover Up of Imperial Japanese Unit 731 - "Although responsible for some of the most grotesque atrocities committed in either theater of the Second World War, much of Unit 731 was granted immunity from war crimes prosecution by the United States government." juniorofficer.army.mil/pa…
👍︎ 86
📰︎ r/Sino
💬︎
👤︎ u/BitterMelonX
🚨︎ report
Robert should cover unit 731 and Japanese Mengele the one and only Shiro Ishii

Given how in a warped sense, Konstantin Rodzaevsky is a dark reversal of Sergei Taboritsky (in that he becomes progressively more competent and sane), it would also fit the "twisted mirror" image for him to potentially have an option to establish Russian Unit 731. It would not only be exceptionally cursed, but would be in-character:

While it's unlikely that Rodz's regime would be as amoral as Unit 731, or be as indiscriminate as Tabby in using the resulting bioweapons on his own citizens, what's to really stop him from using a Russian version of it as a perverse trump card against the Nazis for "belittling" him and Russia?

and all two civilization are super advance

Are there any books about Japan's Unit 731 anyone on here recommend? My English proficiency is advanced native so complexity isn't an issue. 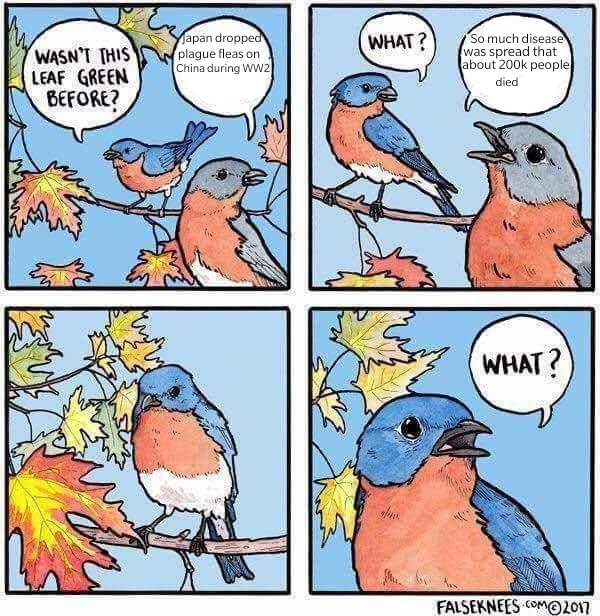 Had the urge to look at alternate translations on Unit 731. I've had some success jumping between languages on the same article and using translation software to find information that the English version lacks. Did this with the Unit 731 article and found denial after denial. Human experimentation was downplayed, use of biological warfare agents dismissed, and so on.

I grew up with the narrative that Unit 731 made Josef Mengele seem ethical. I've never actually gone on a mission to find detailed explanations of that dark story, but generally accepted that they were as terrible as the popular legend claims (i.e. vivisecting people who alive, spreading plagues in China on purpose, etc.).

There is also the trusim that Japan has an element in their population that denies the actions of the Japanese Empire during the wars in China and the Pacific. I have encountered those people previously, even on Reddit. There are the stories of Japanese people knowing little to nothing about the war, much less what happened in any given theater in detail.

Up-front, I'll always willingly admit the terrible things that the US did, from the Camps in the Western US (I've seen Manzanar personally) to the various levels of bad things that GIs and Marines did in any given theater. Don't bring up that nonsense here, it's not relevant to the question at hand.

What are some English-language links to reputable sources for the truthful record of Unit 731? It's not a subject that I'm happy to ask about, but one that I feel like I need to. Book recommendations are also welcome.

👍︎ 12
📰︎ r/history
💬︎
👤︎ u/jsleon3
🚨︎ report
Do you think it was right for the US government to give immunity to Shirō Ishii, commander of Japanese Unit 731 during ww2, in exchange for data gathered from his experiments on live prisoners?

Shirō Ishii, commander of Unit 731, received immunity in exchange for data gathered from his experiments on live prisoners. In 1981 John W. Powell published an article in the Bulletin of the Atomic Scientists detailing the experiments of Unit 731 and its open-air tests of germ warfare on civilians. It was printed with a statement by Judge Röling, the last surviving member of the Tokyo Tribunal, who wrote, "As one of the judges in the International Military Tribunal, it is a bitter experience for me to be informed now that centrally ordered Japanese war criminality of the most disgusting kind was kept secret from the Court by the U.S. government" 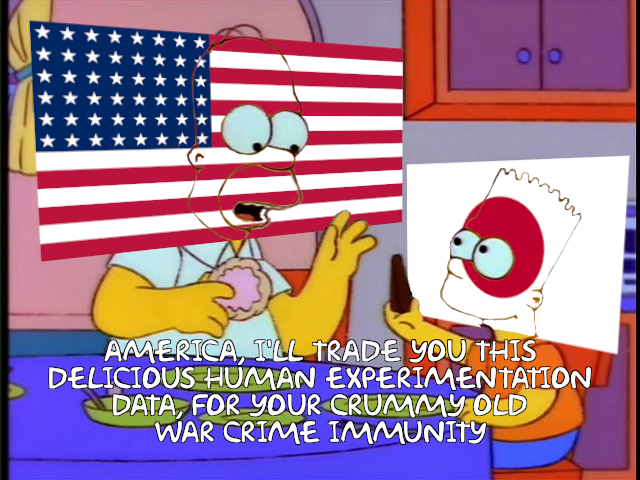 Was there Italian equivalent to Unit 731 and Nazi Human Experiments? If yes, can you explain it? If not, why?

👍︎ 105
📰︎ r/ShitWehraboosSay
💬︎
👤︎ u/College_Prestige
🚨︎ report
I post fascist memes every day despite not supporting the ideology whatsoever until I either surpass the communism guy in days or karma, day 336: Slippery bastards, they were. Don't forget Unit 731, either 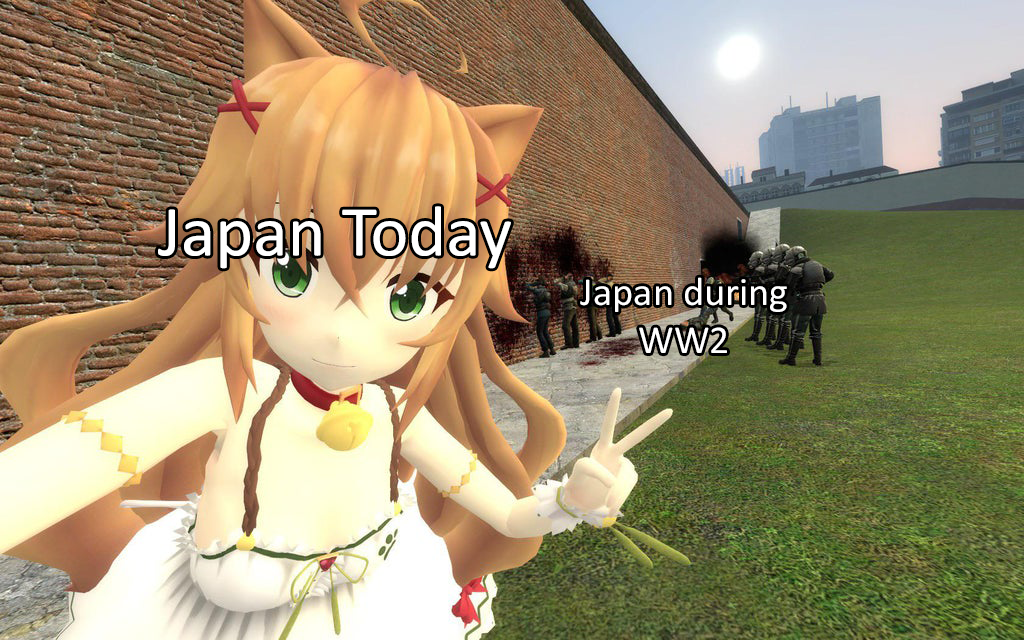 Just to start - I'm not the smartest person in the world so bare with me and you may need to dumb some things down for me a little.

Anyway!! I have to give a presentation and present to different ethical sides in regards to the actions of Unit 731. For those that don't know, Unit 731 was a Japanese biological war unit that experimented and killed thousands of men woman and children. They did such things and directed parts of their body without anaesthetic, put them in pressure chambers alive, tested biological weapons/bubonic plague on them etc. All in the name of "science".

Now it's easy to say how this was morally wrong... but I'm struggling to find a way to say it's "morally right" and link it to an ethical theory.

The only thing I have come up with is Utilitarianism and how "you can't predict the outcome of things". So it could be argued that the Japanese were acting on good "intentions". Mainly on ways to win the war but also to further the medical field. They may have found cures for cancer, or a way for people to live without organs, or maybe even how we can operate without anaesthesia?

I just need some more insight, am I on the right tracks here? Is there another route I could go down?

Thank you for anyone that can help!!