Had some spare time, made a poster for Season 3 of Sex Education! Hope you all like! 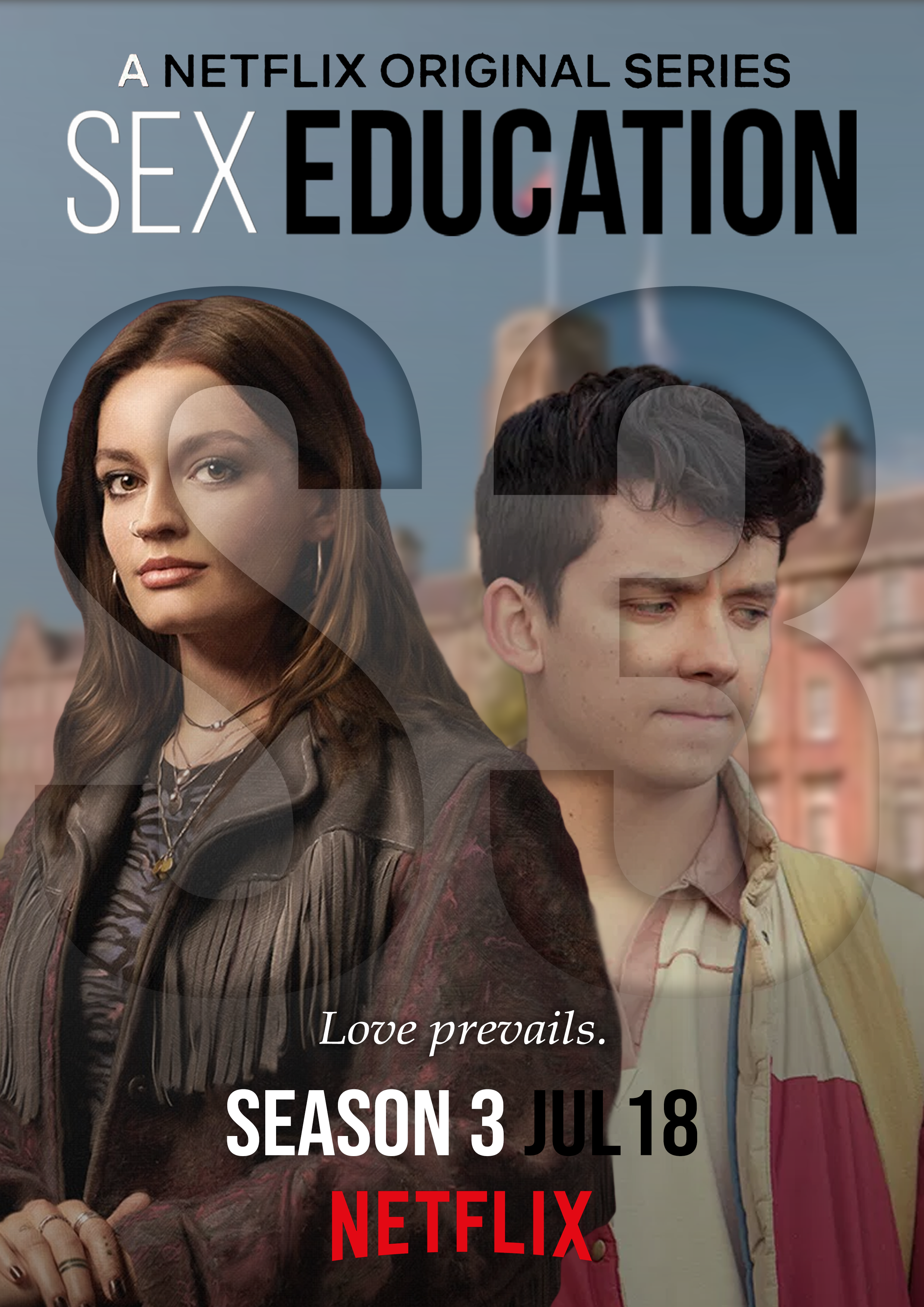 I really thought it would end by season 2, and it would've been perfect if it ended there with Maeve and Otis being together. The ending felt like they were just trying to stretch the series or something. I really hope they don't mess this up, because I don't see what else can they do.

Should we be expecting a season 3 trailer soon, because season 3 is supposedly going to be released January 21.

On top of what I said on my previous post. The show CANNOT keep unsatisfying the audience. People WILL get tired of MAEVE and Otis not being together.

There are SO many things you can explore.. i.e

Maybe in season 4 ( IF THERE IS A S4) you can have MAEVE move in With Otis and Jean, Jean can become the mother figure MAEVE always needed and deserves. I think the “cliffhanger” if we really need one, can be Jean having a miscarriage, or a lesser character dies, I know that sounds morbid but if you want to start eliminating some characters who clearly don’t add much to the overall show then you can do that.

Season 3 HAS to be where Laurie really listens to her fans, Netflix themselves have to listen to their audiences, MAEVE and Otis are the endgame we all know this. BUT that does not mean their story ends. So much more you can do with them as a couple as opposed to keep prolonging them being together and making the viewers turn against the show. I hope everyone has enjoyed my discussion

So this show has definitively got same legs now..!! I recently was looking for something to watch on Netflix and found its title and genre appealing so looked for its ratings and quick reviews to start watching show and there were really good so decided to watch the show. This show really got me invested in it. Its comedy,drama, characters and dialogues were really good but most likeable part of the show that really got me invested in it was the characters of Maeve (Emma Mackey) looks really great, the next Harley Quinn i guess..haha..and adorable Otis (Asa Butterfield), this guy has really got some acting skills.I found the chemistry and connection between these two fictional characters and there will they/won't they relationship really mesmerizing that made me watch the available two seasons on the trott ! It's the best chemistry and connection b/w two fictional characters in a show I have seen after Hannah and Clay from 13 reasons Why. I found Otis and Maeve relationship the main attraction of the show and i guess many thinks that way only, there are shown like made for each and are endgame but for some people love is not that easy to get, really beautiful story.

End of season 2 really broke my heart and I am still not able to get over it and also found how a fictional character ( Issac),yeah the wheelchair guy..!! who destroyed the season ending can become one of the most hated person on the internet ...but its a TV show that's the way it goes..haha, the creators really wants there their audience to hook up for another season of the series so they leave it on cliffhangers like these, but in stories like these that can also be really disappointing to watch for some fans of the show and make them frustrated about it. Eagerly waiting for season 3 now, I wish it can be out today only to see what happens next in this beautiful story of Maeve and Otis, but that's not possible because the new season is still not developed yet. As per some sources on the internet I found that the filming of season 3 was due to start in May, 2020 but got delayed due the pandemic situation around the globe, but there's some news for the fans as production will start from next month August,2020 as the show wants to utilize the big British summer days for its filming. So with around 3-4 months of filming and 2-3 months of post production we can expect it to be released in the 1st quarter of 2021, if everything goes as they plan and there are no more hurdles with the worseni 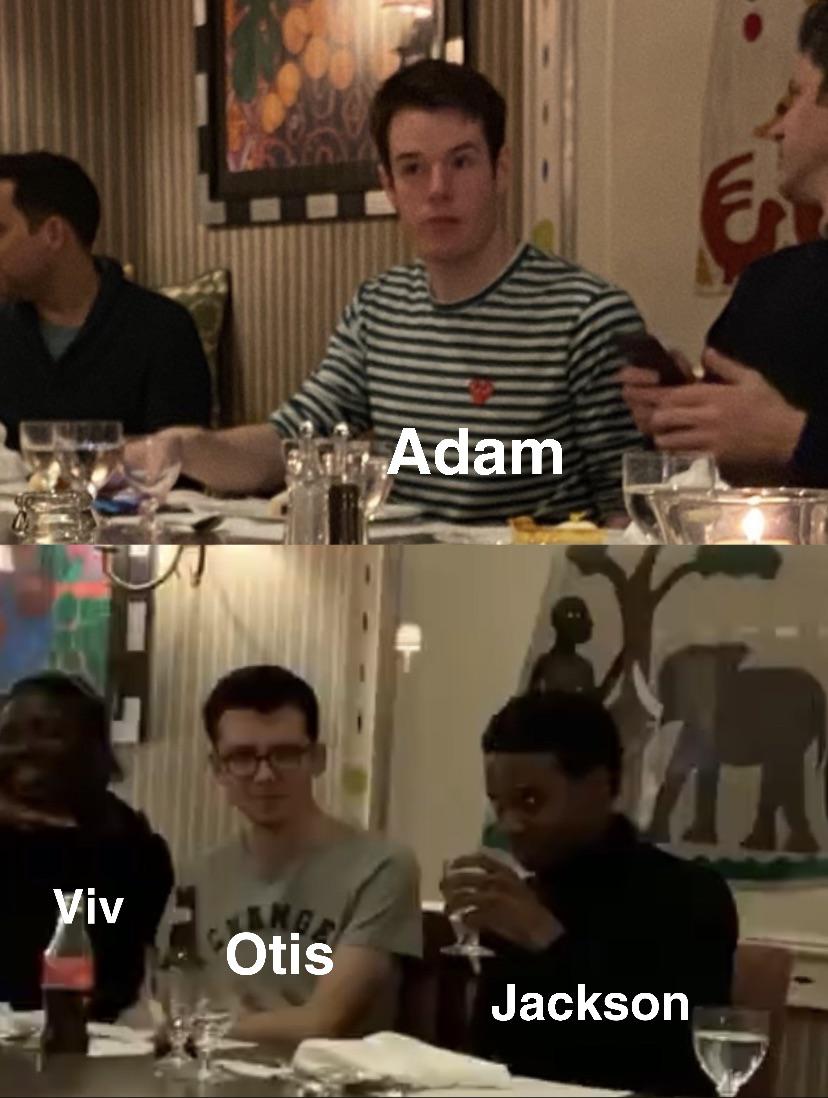 Of all the fan theories I have reddit , I have come to a conclusion that every one wants Otis and Maeve together and many fans have also predicted believable storylines. Even I wanted them to be together in season 3 after the cliffhanger ending in season 2. But when I thought about it rationally I concluded that we may not see them together in the next season also. Here's why -

When season 2 was nearing it's end Otis was shown to have set his priorities straight and declaring his feelings for Maeve. Many people think that Maeve will somehow hear the voicemail in season 3 and they will be together. In episode 8's first minutes We get to know that Maeve is not angry with Otis but in fact dissapointed from him.

I think that Maeve will in fact get over Otis in season 3 because of him being a dick to her in season 2 (episode 6) although she may have a few feelings left for him but I am completely convinced that she will ignore him an their friendship will be in total ruins by the start of season 3.Also Isaac will play a pivotal role has He previously also managed to manipulate Maeve after Otis's party about how they are very similar and special. No matter how hard Otis tries to win Maeve in season 3 she will pretty much ignore him and avoid him throughout the season.

We might get tto see a new love interest for Maeve potentially in the form of a new character in or outside Moordale high and she might in fact go out with the new character instead of Isaac and Otis.

I also think that as Jean reveals her pregnancy to Otis and Jakob. Jakob will forgive her and they will reconcile. As for Otis he might be devastated or supportive of his mother. Jean and Jakob's reconcilation may lead to their marriage mid-season. But there may be twist after their marriage when they find out the child is not Jakob's ( through his fertility test ; Jakob had vasectomy). This would make Jean and Jakob distant from each other and migh affect Otis as well.This possible plot twist might persuade Otis all the more to win Maeve as a measure to escape from the sadness in

In another post a link to the casting of the Issac character was attached.

It was interesting because it shed light on that character being a low-level criminal with some of the traits we see in the show. Certainly his enterprise would not be acceptable to Maeve. But as of the end of S2 we may or may not like him but we do not know he is a petty criminal. Since that casting call was Feb 19, 2019 it is very likely casting for S3 is being advertised now. Rumor is S3 production will start in May. Knowing what new characters are being cast in S3 could be enlightening. Has anyone out there run across any casting calls for Sex Education in Season 3? I could not find any. 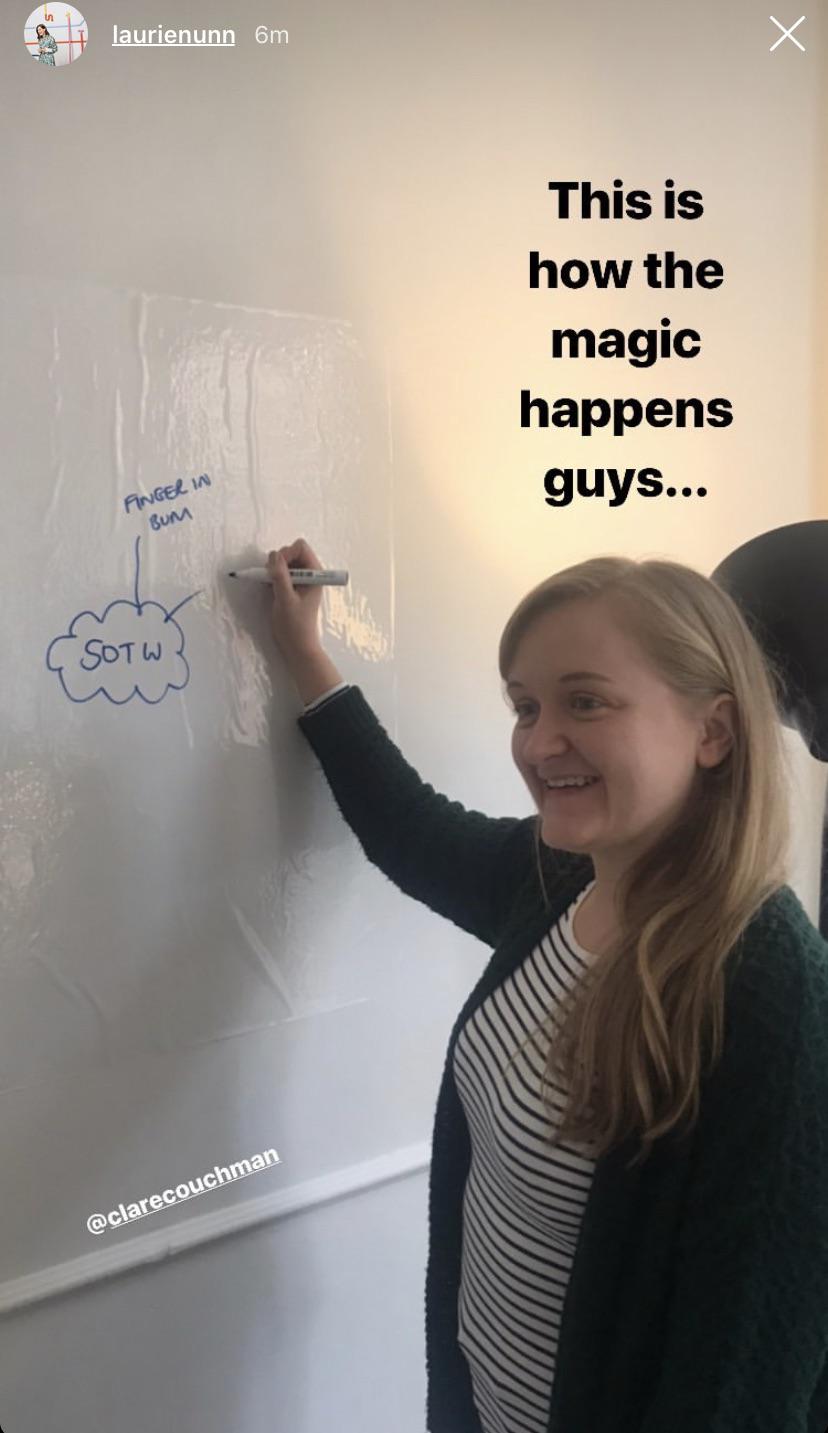 👍︎ 81
📰︎ r/NetflixSexEducation
💬︎
👤︎ u/bullut
🚨︎ report
So I started watching Sex education and I don't have episode 3 of season 1 can anyone tell me what happened in that episode so I can continue binging.
👍︎ 13
📰︎ r/SexEducationNetflix
💬︎
👤︎ u/akshanshk__ak
🚨︎ report
[Thread] Sex Education has been renewed for season 3! What are your hopes for Isaac in this new season?

So lets do the math here, if we say we want to watch at a steady rate of 1 episode per day it will take 16 days to watch the series as a whole. Now we just have to work out the release date.

January 2021, for fridays we have the the 1st, the 8th, the 15th, the 22nd, and the 29th. In my humble opinion, I think we are looking at either 15th or 22nd for the release, because they are the closest to the prior to seasons for the release without being too close to holidays. But we shall work out for all the dates either way.

For the 22nd, we looking at 368 days, first one to cross a year mark, and we know the drill at this point, we have exactly 23 times to rewatch the show, and bam the new season is right there at our finger tips!

This was just a bit of fun because I'm bored and needed to rationalise the vast swath of time before the next season, but hopefully this breakdown is a bit of fun, and helps you guys bide your time too!

👍︎ 9
📰︎ r/NetflixSexEducation
💬︎
👤︎ u/DementedMedic
🚨︎ report
Ever get that feeling of deja vu? (SPOILERS FOR SEASON 3 OF 13 REASONS WHY AND SEASON 1 OF SEX EDUCATION) 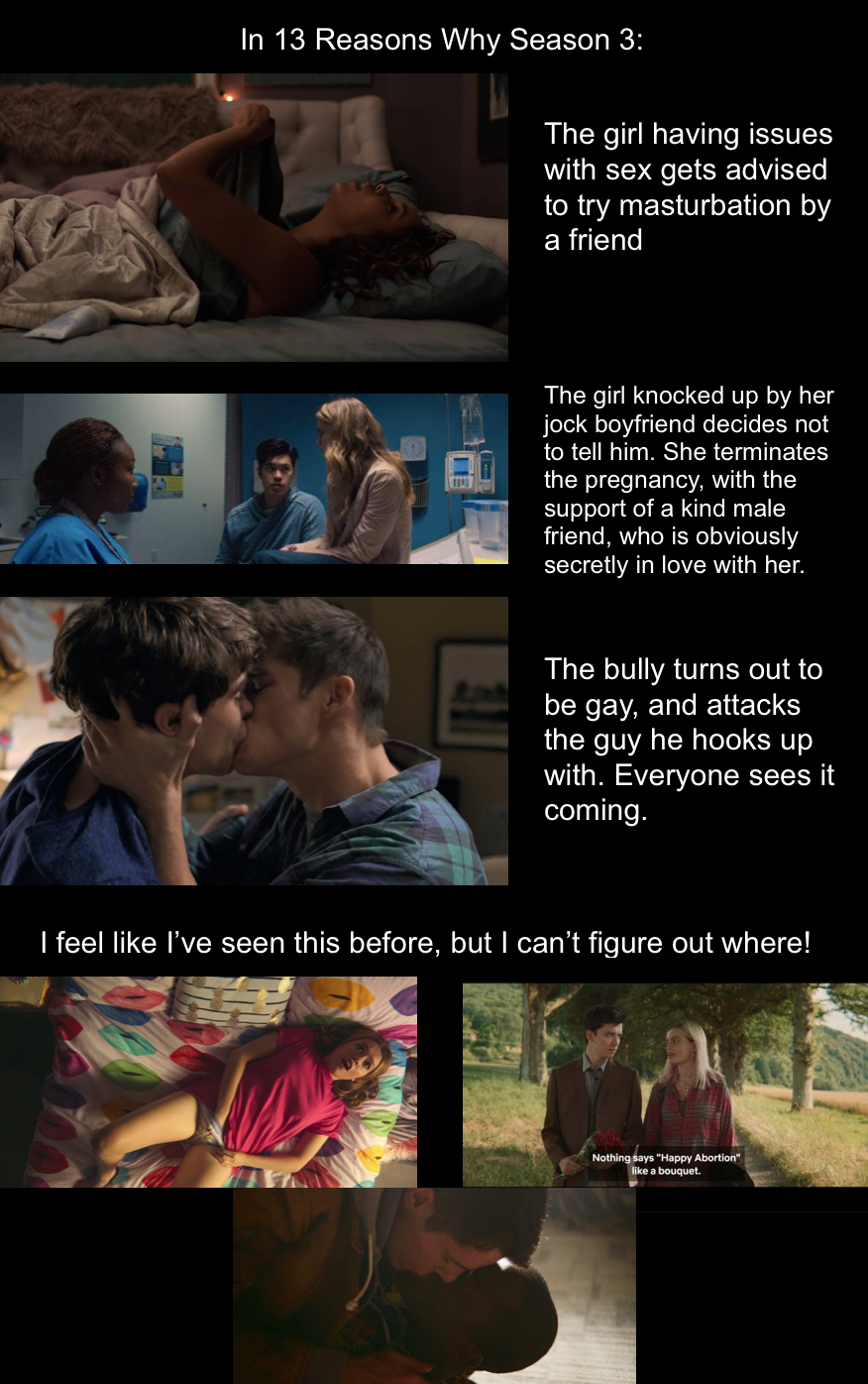 This thread is open to what you may or may not think will happen in season 3 of Sex Education! Spoilers from season 2 are very welcome :)