Although on many aspects, Firefox is much much better than Chrome, it does lack in some aspects. Particularly, Firefox Android is very lacking and I find myself needing to keep brave browser installed on my phone just to view pages that appear broken on Firefox.

I've tried convincing Chrome users to switch but apart from a couple, most didn't even consider it. Firefox appears to have developed a reputation of being a 'dead' browser of sorts? To convince people to switch, it would probably need to offer an experience far better than Chrome. So far, it's just playing catch up. Do you think it can ever come to a point where it can actually compete?

Is it just me or Firefox for Android is slower in loading pages/websites than other other browsers?

I tried opening the same websites on Bromite and Firefox. Bromite is way faster than Firefox. In Firefox, I only have uBlock Origin enabled as an add-on.

I don't want to switch to another browser because I use Firefox on desktop too.

I know most people on this sub are English Speakers, but I hope that you guys could hear me out.

The Arabic Firefox name cannot remain as فيرفكس (it literally pronounces Firefox, but in an unconventional way)

The reason why is because this isn't a literal word in Arabic and it needs short vowels in order for the pronunciation to be correct. For those who are uninformed, short vowels are written to properly comprehend and pronounce the form of an Arabic word. But the problem is that فيرفكس is not an actual word and it relies on short vowels, so it doesn't make sense to use it as is.

I could think of 3 better options than this:

1 is to retain the pronunciation and use the common spelling of it as فايرفوكس. This was probably the intended usage, as it correctly spells out "Firefox" letter by letter with the correct vowel usage. Even wikipedia lists it this way in the title.

2 is to actually translate the word's meaning into Arabic. So instead of pronouncing the word "Firefox," it could read its meaning as نار الثعلب which literally means the fire of the fox or the Fox's fire. (Coolest imo)

3 is to just leave it in English as "Firefox"

Edit: Others are pointing out that option 2 should actually be ثعلب النار, and this would translate to Fox of Fire. I also think it could even be الثعلب بالنار (The Fox with Fire).

Edit 2: I posted it on Bugzilla https://bugzilla.mozilla.org/show_bug.cgi?id=1684357 thanks u/xelaseer 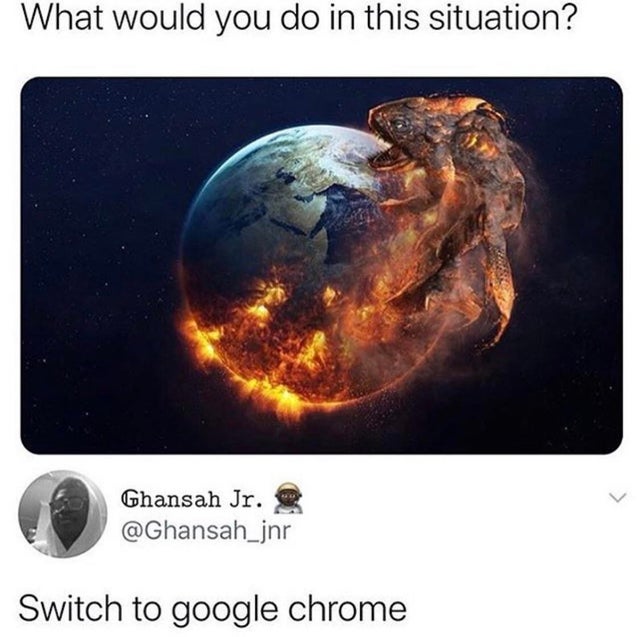 Firefox has a usage share of 8% whereas Chrome on the other hand has a usage of 66%. I find this rather staggering considering how Firefox has better privacy and is open source which gives a lot of freedom in terms of how you want to configure the browser. 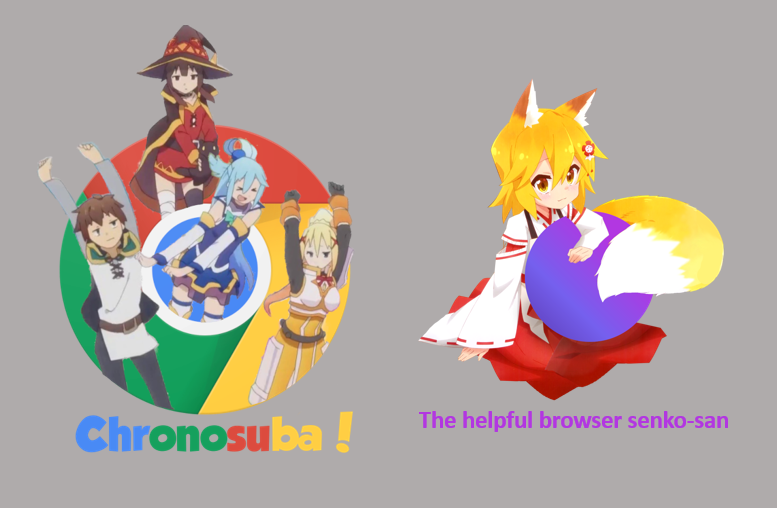 👍︎ 14k
📰︎ r/goodanimemes
💬︎
👤︎ u/blending-tea
🚨︎ report
The new Firefox Loading icon after some budget cuts v.redd.it/gf2renlb71961
👍︎ 1k
📰︎ r/AnimalsBeingDerps
💬︎
👤︎ u/Le_Gitzen
🚨︎ report
Firefox 84.0.1, See All New Features, Updates and Fixes mozilla.org/en-US/firefox…
👍︎ 278
📰︎ r/firefox
💬︎
👤︎ u/SL_Lee
🚨︎ report
Hi Guys, its been such a pain to use Mozilla Firefox on M1 Macs. I am seeing this kind of errors whenever i am downloading a file or opening a popup. Is there a way to fix that ? Thank you

I have been somewhat gutted about this for a while. While Firefox has been in good standing with the privacy scene. I think it is not the best option for it. Many arguments have been brought forth about it being open source. And about it being the only real chromium alternative. All valid points which cannot be understated.

But I want to take this a different direction. And before you click the downvote button. I want you to know that I've already made up my mind on most of these points unless Firefox changes it's approach in the same regard. My objective is to clear up the air as regards below issues I find as to why Firefox is fundamentally broken as a privacy tool.

These are the domains related to Firefox's tracking that I have blocked, others can chime in and add offending ones too.

I think it's time to have this discussion on a serious impartial level where Firefox can be treated as any other organization. Software is made by humans and no one has a claim to infallibility. As much they have a good history of being privacy first, I cannot sit back when Firefox is pinging all these domains in the background.

It worries me. Bothers me to an extent. Are you okay with Firefox doing this? As the recommended privacy browser.

I needed to replace my aging Android tablet earlier this year, and since iPadOS now allows for default browsers other than Safari, I opted for an iPad Pro.

I've now used Firefox on the iPad for a few months and I must ask: why is it so bad? I've been a hardcore Firefox user for 15 years or so, on every plattform. This is by far the worst experience I've had. I should say, I don't mean the fact that there are no addons or that it's not using Gecko. I understand that there are some restrictions on Apple's i-devices.

Some examples of what's broken:

There are more things that bother me, but these are by far the most annoying. Both issues have been reported on Bugzilla and/or Github months ago, but nothing seems to happen.

Is there simply nobody working on Firefox for Apple i-devices? Or just not on the iPad version? Does anyone here know anything about this?

Alternatively, is there a way to sync my iPad's Safari history and bookmarks with the rest of my Firefox Sync content? If so, I could live without running Firefox on the iPad, even if unwillingly.

If something is not critical for your use case, please try to see their point of view and accept things how they are. This is a David vs Goliath type of battle. We are in David's camp. Unlike the story, in real life David will pretty much take a beating from time to time. We are using the underdog and we should accept this. If there is a workaround for your issue, please use it! If you don't know any workaround, please ask here. Don't say: 'uuuu... I don't want to use beta or nightly'. Just try it. If there are issues, then complain, but not before trying them. Both Beta and Nightly are pretty stable and for me it's worth the Fennec stuff I get back by using them.

If Firefox is not good, use another browser, it's fine. This is not a life or death decision. You can switch to another browser. You can also try Firefox again every few months to see if it's better for you or not. You can permanently switch if you want to. It's not the end of the world.

We, as users, need to stick to constructive feedback. Harassment or spam comments on Github don't help. The Android team can barely build and maintain one browser, it cannot build 2 (old and new code). There is a lot of work being put in a browser engine and without Gecko, there is a monopoly of ideas on how the web should be built. Without Gecko we will get more privacy invading APIs, more AMP-like garbage and so on. If Fenix would have switched to Chromium, they would have gained velocity in development but lost the seat on the WWW table. We have tons of high velocity feature packed Chromium based browsers. The world doesn't need another one. The world needs a strong voice on the web standards table.

The harsh constraints the Fenix team was put under made them cut some features. Please communicate this! **Please write a blog post or a SUMO page saying what Fennec/Fenix gaps there are, what bug is tracki 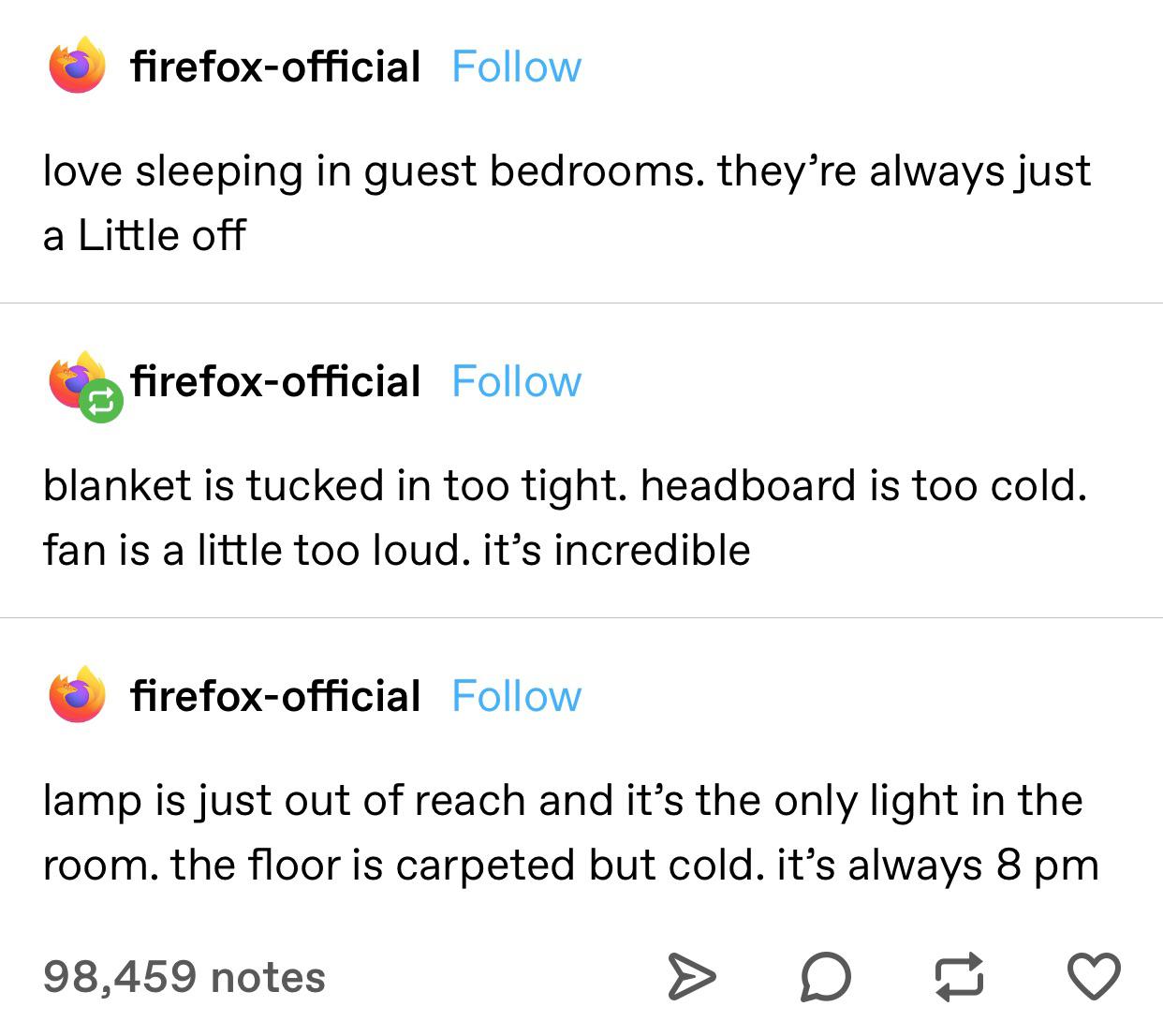 Hello everyone I really struggle between those two browsers. Can you convince me why should I use Firefox over Chrome on both every day usage and web development? 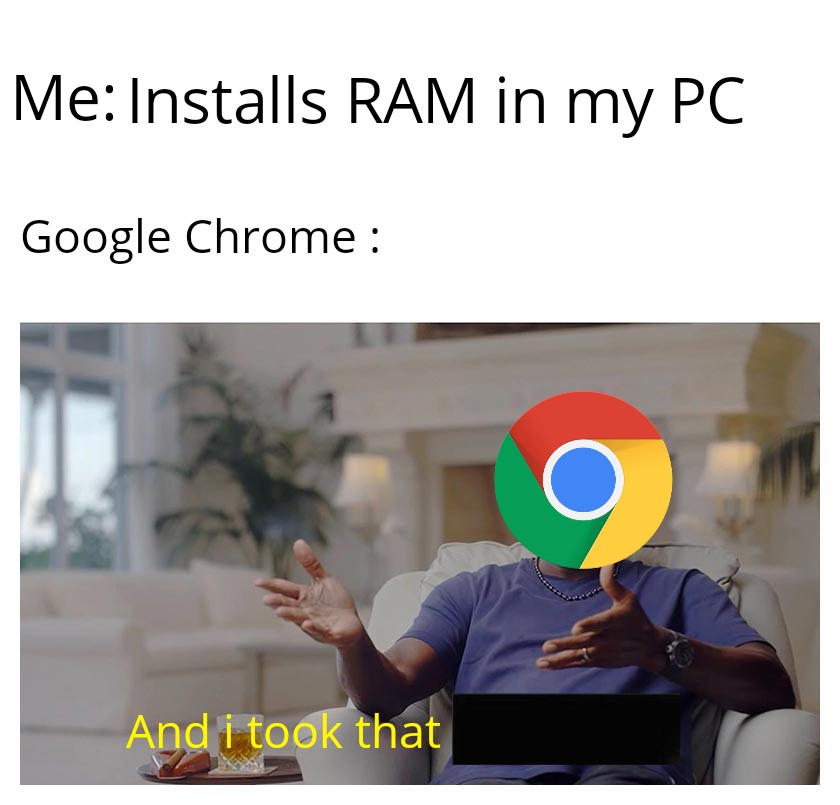 👍︎ 610
📰︎ r/FortNiteBR
💬︎
👤︎ u/Popleto
🚨︎ report
Do not use the inbuilt Browser. Use Firefox. Go to add-ons and get Origin blocker. It does everything the normal browser does with no ads. Even on youtube etc. Enjoy all websites with no ads

Download Firefox then the origin ad blocker plugin while in the browser. Firefox has 3x multi window support and no ads after you do. Not even on youtube. Enjoy the web in VR with no ads. Resize windows for maximum browsing and enjoy

So I'm going to need a vpn in about a month due to work, and I'm hoping to use Firefox vpn to support the browser, but it looks like it's not available in my region yet. Anyone know why they're releasing it in different regions so slowly?

And is it just that there's no language support? If that's the case I speak english, so if Firefox doesn't block my country entirely, I could just hop on a web proxy and pay for it. Anyone know if they're doing that?

👍︎ 162
📰︎ r/firefox
💬︎
👤︎ u/RagingRope
🚨︎ report
Made a flyer to promote Firefox in my community (second version based based on feedback). Download link in comments :)

So as an edit:

I mean a proper fork. Most "other" browsers like Vivaldi, Brave, IceFox, WaterFox, Bromite, are built on top of the current Firefox or Chromium.

Let's fork that shit and never look back.