Last segment of Pelješac bridge was lifted into place tonight. After more than 300 years, with the help of the EU funds, Croatia is a connected country and Dubrovnik is no longer an exclave. Croatian PM Plenković will be among the first one to walk across. 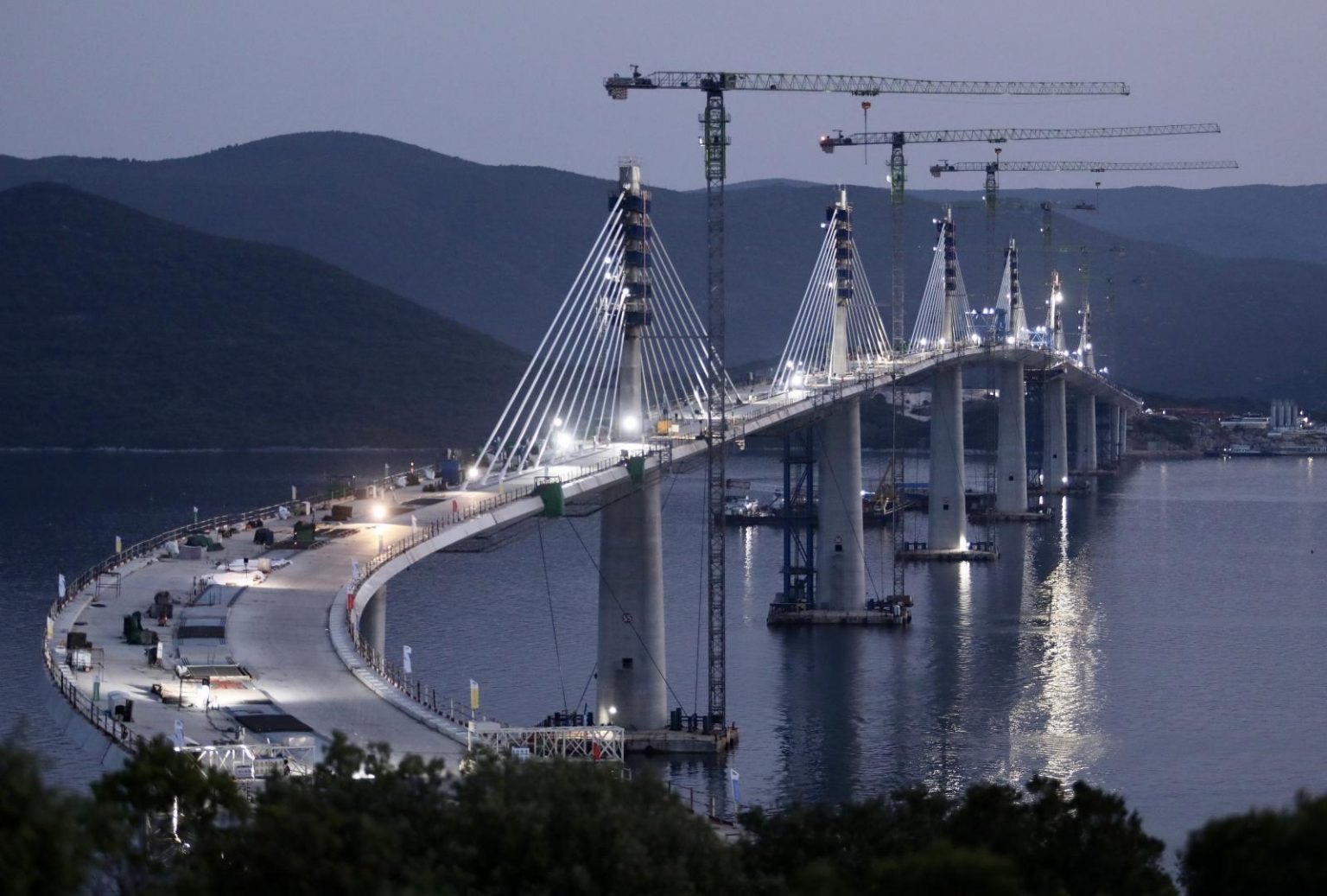 The government of Bosnia and Herzegovina has long had an upstanding relationship with the country of China. We wish to expand our relationship with The People Republic through a Free Trade Agreement. We already have one of your biggest shipping companies, COSCO, in Sarajevo, have proposed plans to build a new port in Neum, and have accepted loans from Chinese energy companies. The next logical step would and should be an FTA between our two countries. We hope that our proposal for an FTA will benefit both Chinese businesses here in Bosnia, but also grow Bosnian businesses in China, like Bingo and Holdina. Thank you, and god bless Bosnia and China.

I've spent a lot of time researching this but am unable to come up with definitive information. My girlfriend and I will be renting a car on 5/13 in Zadar and returning it to the same location on 5/20. We will drive south to Dubrovnik (crossing the Neum Corridor) and would also like to visit Mostar (on the way from Dubrovnik back up to Split). I can only drive automatic, so was planning on renting a VW Golf.

-I have read in a couple of places that VW cars (in addition to some others) are not allowed in Bosnia and Herzegovina. I am assuming that crossing the Corridor is exempt from this rule, if it is even still a rule? What about if we wanted to visit Mostar? Are VWs not allowed on the roads that far into the country?

Thank you for any and all advice, I expected this to be a simple process and it definitely has not been.

In a speech in the town of Mostar today, Chairman of the Presidency formally invited “any and all displaced peoples from the awful wars in the middle east a home is Bosnia and Herzegovina.” He stated in his speech that “we are a country that knows chaos in our past, and we hope that we can help you escape it.” The community of Mostar, which is split between Croat and Bosniak was equally split in its reaction to the speech. Most of the Croats in attendance left in protest after Izetbegović stated he would open doors to refugees. Mr. Izetbegović’s speech was cut short what a Croat teenager attempted to throw a water bottle onto the stage, whereupon the President was quickly ushered offstage and into his car.

A small riot broke out between Croat and Bosniak citizens of Mostar that was quickly broken up by Mostar police. Two people suffered minor injuries, both Bosniak.

In his speech, Mr. Izetbegović outlined that he would offer temporary visas to 1500 migrants at the start of 2020, and that number would be reduced to 500 annually in the years after that. The conflict at the speech erupted when Izetbegović stated he would give the first migrants homes in Neum.

Neum is located in Southern Bosnia and Herzegovina, and includes Bosnia’s only 20km of coastline. The town has a population of 4,600 and they are 97% Croatian, with only 63 Bosniaks and 21 Serbs living in the municipality.

The Croat member of the Presidency, Dragan Čović spoke with a reporter in Sarajevo just hours after President Izetbegović’s speech. Čović assured his Croat constituents that “Mr. Izetbegović’s foul proposal will never see the light of day. He is just riling up age old ethnic conflicts. Mr. Ivanić and I will never vote on such an invitation and Mr. Izetbegović cannot do this unilaterally.”

He refused to comment further on the issue although, a shortly after this interview, President Čović tweeted that

“B. Izetbegovic possible in violation of Dayton. My opinion. Ask ICJ”

President Milorad Dodik echoed Čović’s statements, calling for the ICJ to charge Izetbegović with violating the Dayton Agreement that ended the Bosnian War in 1995. Mr. Dodik himself was found in violation of the Dayton Agreement by the United States and currently has sanctions imposed on him by the US Government.

Serb member of the Presidency, Mladen Ivanić however, also reiterated Čović’s statements and called for an investigation into Mr. Izetbegović’s statem

As part of its continued engagement in the Western Balkans, Austria has resolved to intensify its regional development programme set out in 2019 and known as the Danube Prosperity Zone. In light of this, today, Vienna has announced a range of new proposals, which if accepted, would have the potential to dramatically improve regional prosperity and security. These proposals have been sent to the Kosovan, Albanian, Macedonian, Montenegrin, Croatian, Slovenian and Bosnian governments, and are as follows:

After having made agreements with several major Austrian construction and transport firms, Vienna is pleased to formally put forward the following rail expansion projects for approval. Under Austria’s plan, the new routes will be constructed between 2034 and 2039, with 60% of funding coming from Austrian enterprises (who themselves will receive a 50% government subsidy) and the other 40% coming from local sources.

Noting the total absence of rail links between Kosovo, Albania and Macedonia, Austria moves that the three nations’ capital cities are linked via a regular-speed train line, for both cargo and passenger purposes. Given the importance that these nations hold, both to each other and to the entire DPZ, it is crucial that they are adequately linked in order to more easily facilitate trade and personal links.

As with Kosovo, Albania and Macedonia, the nations of Montenegro and Croatia do not currently have rail links in place. This represents a major opportunity for Vienna, Zagreb and Podgorica since the trade which could potentially be generated by a rail line between the two states would be immense. Furthermore, with Montenegro signalling that it wishes to proceed with EU integration despite Serbia’s rejection of membership, it will be important for the small state to have rail access to the EU, via Croatia.

This will be an internal development project to be carried out almost exclusively within the borders of Croatia, in order to link the cities of Dubrovnik, Ploče and Split together via a regular-speed rail line. By connecting these three cities, a cont

Gravity Dams - The work at the dam in Muqqadas A’yun during the Year of Blood led to innovations in water retention. By using the downward weight of material at the top, the stone can resist the horizontal pressure of water flowing against the dam. This allowed the water to be more easily routed into smaller drainage channels that could then be held or sluiced as needed. With the loss of access to the Rikaval River, this damming helped the Na’Missae retain some major source of water. However, the river was never fully dammed, as that was part of their peace agreement with the Ehrteht. Other smaller, similar dams were installed elsewhere, particularly at al-Baqma.

Aqueducts - With the advent of the gravity dams, developments in carrying the dammed water were needed. Some Arathee Seekers, returned now that there was peace, described large stone canals that could carry much more water than anything the Missae currently had. Supported with arches, these aqueducts were incredibly useful in carrying water to all parts of a city from a central source.

Bottle cisterns - Although there was very little rainfall in the Tetseg Aous, the brief rainy season in the south had always been a blessing, and the Na’Missae stopped whatever they were doing to collect this precious rainwater. A development on the traditional open cistern was created to hide water sources from enemies; it was deemed after the Year of Blood that this would be a good idea. By boring deep slender holes into the rock, rainwater could collect but be largely hidden, either by placing stone back on top, or hiding the hole in some other way. These bottle cisterns were particularly famous at al-Baqma. Their placement was critical; too many and they could degrade the structural integrity of the buildings - too few and they wouldn’t be worth the effort. They needed to be placed in key locations that could be accessed even in the event of a siege, but hidden enough enough to not be discernible to a foe who took control of the city.

Fountains - The final part of this water catchment system was the development of fountains throughout the city. The aqueducts were relieved into elaborately carved spouts that could be collected or, if left uncollected, wall spill into basins that connected back into the main reservoir system. Most of these fountains were carves into the shape of oryx, camel, or horse heads, but other, more exotic shapes could also be seen throughout Na’Missae cities. They were also prevalent