If anyone tries to tell you that Buggy isn't an important character, just remember that he appears in 12 of the 23 One Piece openings, only one less than Shanks (list of openings in comments). 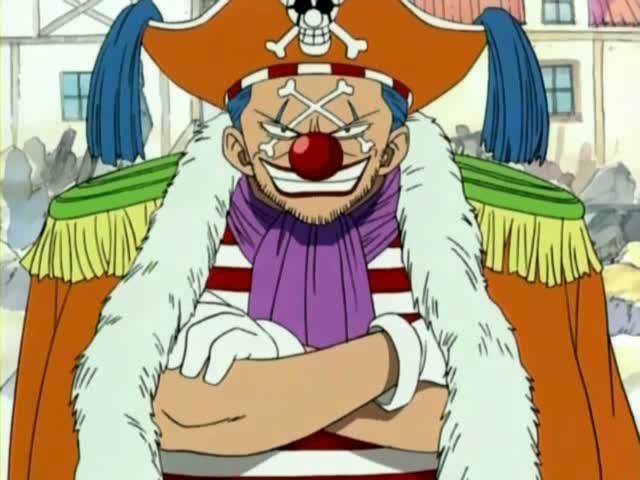 The recent chapter has finally began shifting the storyline to the end game, however there is still a mountain of plot points that have barely been touched let alone resolved. So I decided to compile a list of the vast majority if not all the open ended plot points and character threads that still exist in One Piece. 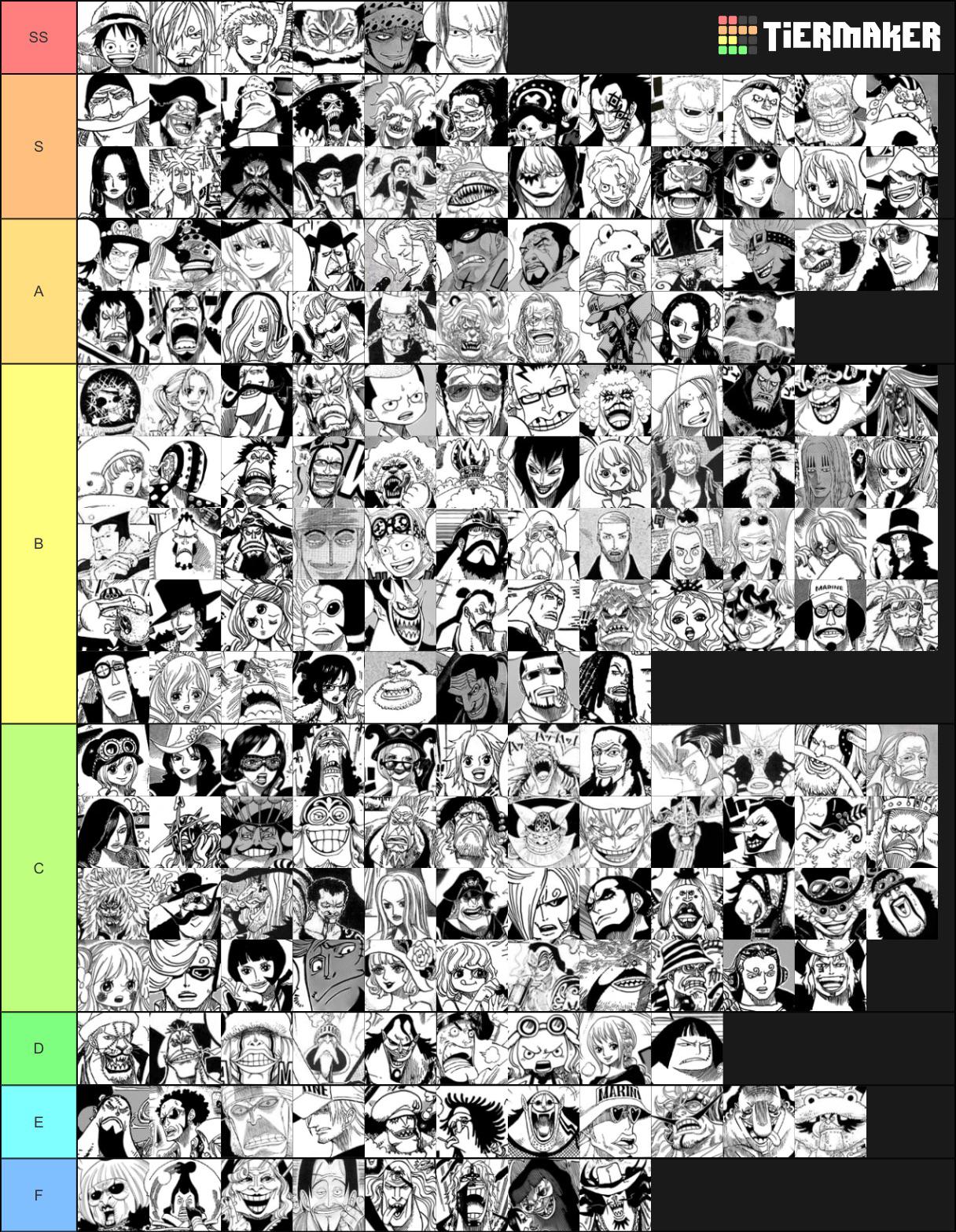 Note - author is big ol homo in a happy marriage and made this post on his phone instead of working. I am not able to reference anything for research so 90% of this is misspelled or just wrong. This is for fun so please enjoy and feel free to add your take or anyone else I didn’t mention.

Monkey D Luffy - most likely asexual, has not shown any romantic interest and has no signs of attraction to male/female/fish/mink etc.

Zorro- most likely straight, his relationship with Kuina was plutonic and they were more rivals than anything. He’s shown no signs of attraction to any other person except maybe Tashigi. He lived with Daddy Mihawk for 2 years and clearly wasn’t with Perona so in my head cannon they are the power couple of swordsman, but it reality Zorro is almost certainly Heterosexual

Ussop - his relationship with Kiya well establishes him as straight. He does have a mancrush in Giants but that’s a whole mother bag of cats

Sanji - about the definition of aggressively heterosexual. One of the few characters that can be classified in absolute certainty

Nami - Super Fem lesbian. Shows no attraction emotionally or physically to any male characters. Took a bubble bath which Kalifa. What convinced me is her interactions with Tashigi, Nami had a real moment when she saw a young/strong female marine with a kind heart and if they are not endgame I’m going to be severely disappointed

Chopper - he’s not really human but he’s still almost certainly straight. His reaction to the lady deer mink was the only time I recall him showing any physical or emotional attraction to anyone.

Robin - No real evidence to support either but she doesn’t feel asexual the same way Luffy does. She actually does seem at least a little flattered with Sanjis affection, so she seems capable of physical/romantic feelings, we just haven’t really seen any. I’d like her to be a power lesbian, but she is most likely straight.

Franky - if he lived in the real world he’d be an Insta gay celeb. Way to represent your people Franky, pants are the enemy. He’s honestly shown now actual signs of attraction, he didn’t seem to be involved with anyone in the Franky Family even thought he had two hot “twins” with huge boobs and bikinis, plus all the other members in metal diapers (why am i still analyzing, he’s SUUUUUPER gay)

Brook - pretty sure there are laws named after this perv. No interest in seeing any mans panties so he’s not boning any dudes soon (Yohohohoho)

Jinbae (how do you spell

👍︎ 15
📰︎ r/OnePiece
💬︎
👤︎ u/Ignaciodelsol
🚨︎ report
Decided to make a tier list of what I think are the saddest backstories in all of one piece, let me know if I missed a character or if some people should be moved up or down 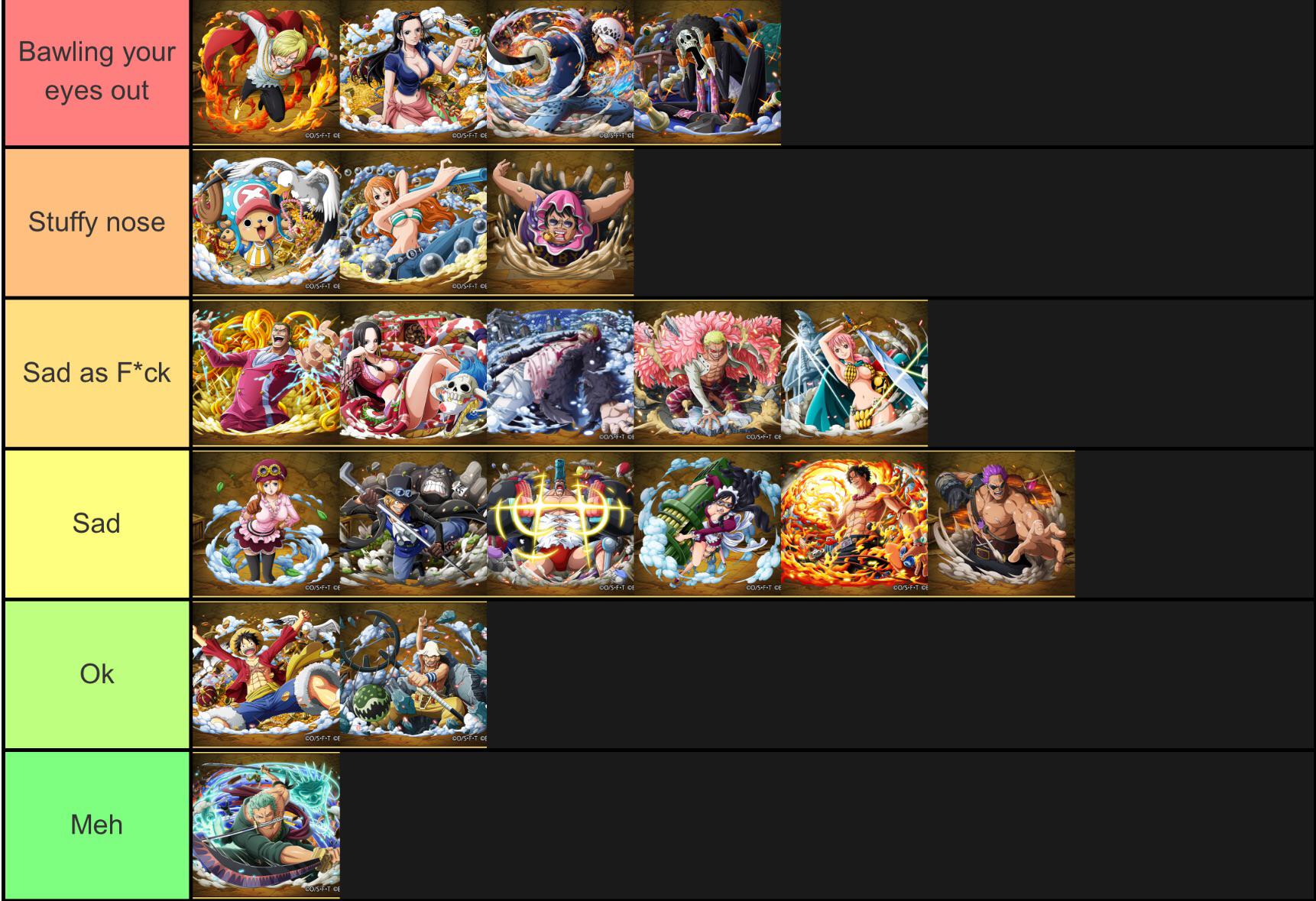 👍︎ 591
📰︎ r/OnePiece
💬︎
👤︎ u/Killjoy3879
🚨︎ report
I compiled a list of every statement Oda has made regarding the way One Piece is written and drawn. (includes comments about story/character themes, art style, mindset while writing certain subjects, etc.)

The sources are in bold, and are mostly in chronological order. Huge-ass list, but there's some very interesting stuff here, folks. Especially if you're an aspiring comic artist or a major One Piece geek.....of which I am both.

Japan is about to get it’s umpteenth Dressrosa batch consisting of only V2 RR Rare Recruits and bringing with it a V2 Legend. They have officially milked this arc dry, though I don’t think that is going to stop them. So how about we look through the relatively untouched part of the cannon and come up with a list of characters that deserve a RR version that the Bandai spies can steal? No need to think about what they should do, just think about who might make a better batch of RR Characters than Marineford Arc Part 11.

There are only two rules

Also, Bonus Points if you come-up with an unused scene for the Bandai People to use. We technically don't have a RR Whitebeard yet either, but between two legends, an ambush version, a TM version, a LRR version and the upcoming Raid Whitebeard I doubt there is anything he did that is not in the game yet.

An example of this would be RR Wyper, I could imagine his Special Animation being him taking down the bean stalk. I know he didn’t try to hit anyone with a falling bean stalk, but it would be a cool looking special if they tried to imply that he did.

Finally, no spoilers, obviously. The point of the exercise is to try and find characters that Bandai have neglected up until now. If they haven’t appeared in the anime yet they haven’t had a chance to be neglected, now have they? ;)

👍︎ 29
📰︎ r/OnePieceTC
💬︎
👤︎ u/GreatKingAlpha
🚨︎ report
Was going through the Simpsons Japanese cast list and realized that a lot of them voice characters in One Piece, so here they are

I'm doing a mod for Football Manager and want to make an One Piece team.

If possible, i need a list of 10-15 characters mix with strongest, best or importants characters in One Piece universe, if you help i will apreciate a lot. Thanks

And sorry about my english, i´m brazilian

I need official heights for a personal one piece project i want to do. Is there a website or file with them?

Much like the famous Schrödinger's Cat, these characters are both alive and dead. How is that possible you ask? Simple. We haven't seen or heard from them in a long time. For all we know these characters could be long dead by now. They could have been struck down by Enel's lightning for all we know. Notable examples include:

But wait, u/TheWarGiraffe, I thought Sabo was Schrödinger Dead? Yea, well he "died" once before. This is that category. This goes to everyone who is implied dead but might not really be dead. Generally, no body was recovered.

This category goes to everyone who is dead (wow, who saw that comming?). These characters are 100% confirmed dead, but don't substantially impact the story line. Such characters include:

👍︎ 258
📰︎ r/OnePiece
💬︎
👤︎ u/TheWarGiraffe
🚨︎ report
Does anyone know where I could find a list of One Piece characters in order or appearance?

Most lists show the whole crew as it us currently but I'm still on Sky Island and I don't want to spoil anything about them.

👍︎ 2
📰︎ r/OnePiece
💬︎
👤︎ u/OmarGuard
🚨︎ report
Newest hopefully most updated list of One Piece character references. And do you think they know the joke? That the people that characters in One Piece are based off of know they have a cartoon version of themselves with superpowers and funny speech paterns.

For starters we have this kind of list that I am sure we have all seen. http://cdn-usa.gagbay.com/2013/04/one_piece_characters_are_real_life_people-273235.jpg (PS fuck 9gag for putting their shitty little water mark on this, I know for a fact they are not responsible for this image) But this is far from all

Oda said himself that Sanji is based off of Steve Buscemi's Mr. Pink from Reservoir Dogs

Oda also says he loves Tim Burton. We see this in three characters:

Brook is obviously Jack Skellington, but there are also three famed musicians contributing to his look: Jimi Hendrix (Clothes+Fro) + Slash (Hat) + Ozzy Osbourne (Glasses). (Man can he ever fucking rock)

Gecko Moria is Oogie Boogie Not only in appearance but for his hatred of Brook/Jack Skellington, his creepy little minions, and his powers with the help of Doctor Hogback.

and Inazuma, who shares scissor hands with Edward Scissorhands.

Crocodile is a mix of John Travolta and Steven Segal, both of who have achieved fame playing the opposing roles of Gangster and Cop. And as we know Robin, who worked with Crocilde, is based on Uma Thurman's character Mia Wallace. Travolta and Thurman both worked together in Pulp Fiction on the same team... sorta.

WhiteBeard is Hulk Hogan who is famous for having muscles like tree trunks and calling everyone "Brutha" (kinda ties in with WhiteBeard wanting a family more than anything else in the world) Speaking of which does anyone know is Hulk Hogan knows there is this character based off of him? Cause if he doesn't he should cause I imagine it would be very flattering to know that there is a character based off of you that is 1) a wise leader and respected badass 2) literally called the strongest man in the world even by the government and his enemies and 3) such a family man and with such an important role in the series.

👍︎ 75
📰︎ r/OnePiece
💬︎
👤︎ u/Leefan_returns
🚨︎ report
Is there an archive of One Piece characters where it lists all their fights?

Such as listing one character vs another as well as how many wins/loses the character has had in the series? It's probably a lot to ask for but I think it would be cool if it existed. I am sure the One Piece Wiki lists fights a specific character has but i'm trying to avoid the Wiki due to spoilers, thanks!